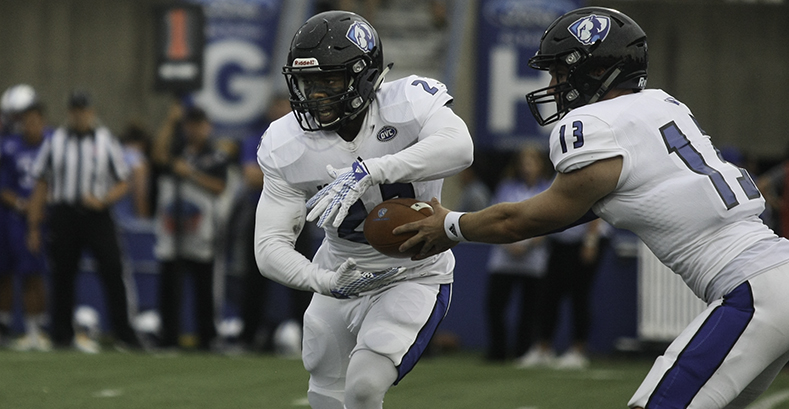 Junior running back Isaiah Johnson recieves the handoff from quarterback Mitch Kimble Thursday at Memorial Stadium in Terre Haute, Ind. Johnson rushed for 66 yards on 15 attempts and a touchdown in the Panthers’ 22-20 season-opening victory.

Every team practices it, every team dreams of executing a game winning drive, and yet not all come through.

Whether it is exciting to watch, or just adding fuel to an already high stress level, the two-minute drill game-winning drive cannot be a go-to.

We have all seen it. The quarterback of a team buckles down and leads the squad the length of the field and does not stop until the ball ends up in the end zone for the win with only a few ticks left on the clock.

It is great to see and the team is fired up, but it is not an ideal way to win the game.

Nonetheless, that is how it went down Thursday in Terre Haute in the Eastern football team’s season opener against Indiana State.

It was a look at an Eastern offense that had not been present the previous three and half quarters. The Panthers were in reach because of redshirt freshman defensive back Mark Williams’ 73-yard interception return.

A couple special team mishaps made things more interesting than it needed to be.

And like it has been done before, Eastern with 1:52 left on the clock, backs against the wall facing its possible fourth-straight season-opening loss, came alive and executed the two-minute drill for a 22-20 win.

Redshirt senior quarterback Mitch Kimble led the Panthers down the field, going 7-9 passing and taking Eastern 69 yards on 11 plays for the win.

Nothing gets adrenaline pumping, stress levels rising, excitement or utter disappointment, and sports bettors in disbelief than a last-second win.

Looking ahead to Northern on Saturday for the Panthers, it is time to keep that card in their back pocket and pull out a win that results in one final snap and Kimble taking a knee to run out the clock.

And vice versa, do not let Northern march down the field for the win in the final seconds. The low is the same, if not larger than the high of the last second win.

Prior to last Thursday’s game, coach Kim Dameron and Kimble both said the key to their offense is protecting the football. Eastern turned the ball over in all but one game last season.

Thursday was a good start to a trend in that aspect. Eastern did not turn the ball over in the win, except for the two failed fourth-down conversions.

By the end of the game Eastern put 278 yards of offense together, but 69 of those were because of the game-winning drive. Kimble also threw for 84 yards in the fourth quarter, entering with 120.

Kimble said the reason for the lack of production on offense early in the game was because of a few simple mistakes such as missing reads and protection calls; something he said will be fixed by Saturday.

Eastern scrambled for kickers in the game and ended up getting by, but a healthy Bruno is ideal.

The Panthers have a chance to build off the offense it had in the final two minutes of Thursday’s game, right out of the gates against Northern on the road in DeKalb.

The last second win and two-minute drill execution proves Eastern has the grit under pressure, now it is time implement that all game long and secure the win early.