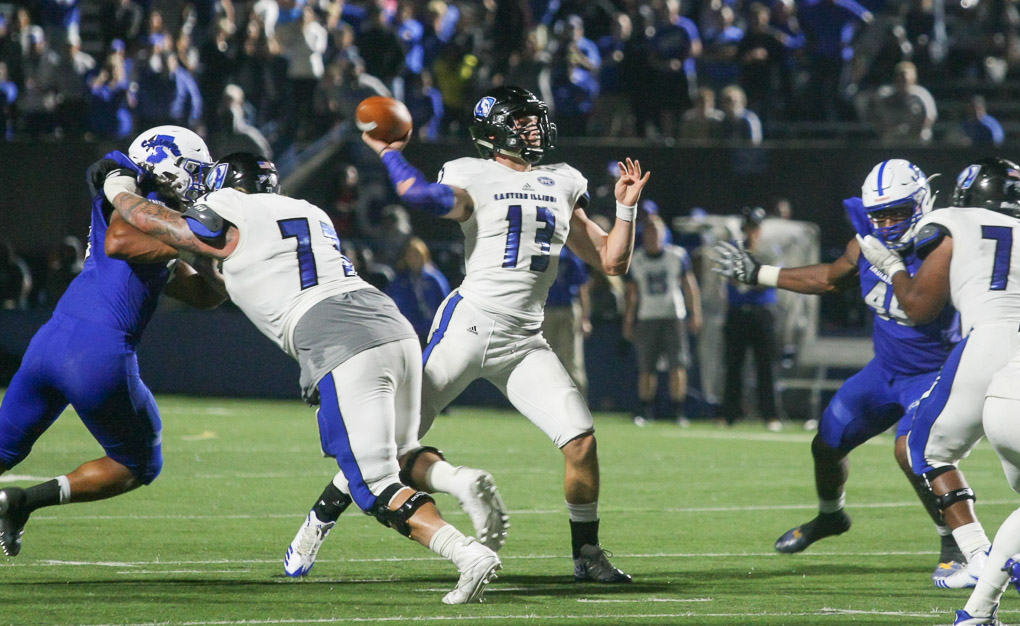 Quarterback Mitch Kimble delivers the game-winning pass during the fourth quarter of the Panthers’ 22-20 win over the Indiana State Sycamores at Memorial Stadium.

Football’s most famous and regurgitated saying, “defense wins championships and offense takes the glory,” is such because in almost every circumstance it rings true. However, what this commonly used turn of phrase fails to mention is football’s third unit, special teams.

Like the backup singer for an A-list performer, special teams is not a center stage and is often overlooked. But, it can, and often does, add just enough of its own influence to a game to affect the outcome behind the scenes, and this is exactly what it did in Eastern’s 22-20 win against Indiana State on the road.

The special teams unit for the Panthers sang its first verse before the game even started. Eastern starting kicker Nick Bruno left the field after suffering a lower leg injury in warmups before the game.

With the clock not even ticking yet, head coach Kim Dameron was forced to make a decision that could change the outcome of the game, “get Matt Severino over here from Charleston.”

Dameron made a call to Charleston to get back up kicker Matt Severino, who was still at Eastern, to drive to the game. Severino arrived on time at the game, ready to play.

“Obviously, when you’ve got your starting kicker, who you have had for three years, and then all of the sudden right at the beginning of the warm-up period he pulls something down there, and so we were scrambling,” Dameron said of losing Bruno.

After Eastern’s second touchdown in the first quarter,  Sevrino missed an extra point and also kicked a ball out of bounds on a kickoff giving Indiana State field position at the 40-yard line.

Those two snafus by Severino were enough to get him replaced on special teams by starting punter Cody Edwards on the kickoffs and backup punter Nick Wilson for field goals and extra points.

Wilson made an impact almost immediately for Eastern as he increased their lead their lead to 16-7 to end the second half after splitting the uprights on a 22-yard field goal.

While the situation at kicker was a bit jumbled for the Panthers, Dameron was pleased with how the replacements performed when called upon.

While no team ever wants to be put in a situation where they must punt, a performance like the one Edwards had can ease the stress of doing so.

Edwards had eight punts for a net of 339 yards (42.4 average), including a long of 54 yards and a crucial punt that pinned Indiana State on their own six-yard line in the second quarter.

In general, the two teams exchanged shots at one another on special teams. Throwing everything from big punt returns, missed kicks and punts pinning the opponent deep at each other.

“I knew that we needed to be dominant on special teams, and I didn’t think we were,” Dameron said. “ I thought we kind of just traded punches. They didn’t just kill us, and we didn’t just kill them. So I think both teams have some work to do special teams wise. But, we just have to continue to work on it and we will.”

It was a big punt return for Indiana State in the fourth quarter that changed the fortunes for the Sycamores to the better however. Returner Dimitri Taylor fielded a return and ran it across midfield all the way down to the Eastern six-yard line.

A few plays after the Taylor return, Indiana State scored on a rushing touchdown with 4:54 to play in the quarter to give themselves a 20-16 lead.

For Indiana State, their kicker Jerry Nunez muscled through two field goals after his team failed to convert touchdowns and Sycamore punter Thomas Bouldin had five punts for a net of 208 including three inside the 20-yard line and one in the fourth quarter that resulted in Eastern working from their own one-yard line.