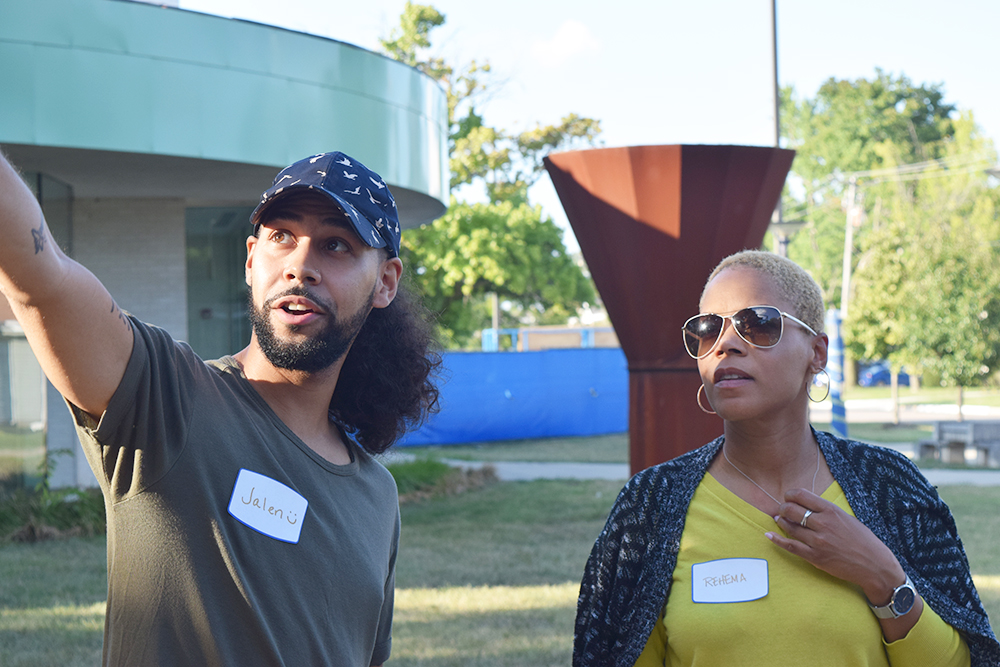 On a late afternoon, on August 29, 2017, the Tarble Arts Center hosted the Tarble Talkback on The Porch Project to get people connected with others.

Tarble Talkback was about getting people out of their comfort zone, developing connections to others, and getting to know more about the Tarble Art Center.

Tables were set up with snacks and group activities for people joining the event to enjoy and feel comfortable with others.

The Tarble Arts Center hosts three events per semester with Tarble Talkback being their first one of the semester. The next event will be Tarble Tables Trivia, which will be Sept. 21.

Event planner of Tarble Arts Center and senior majoring in business management, Jalen Washington, said he was motivated to coordinate an event like Tarble Talkback to get students involved by doing fun things like the icebreakers and to get a diverse set of people.

Icebreakers were in form of a card question game, during which students and faculty would be put into small groups to get everyone involved. The card had a color of red, yellow, blue or green, and a number. So based on the color and number of the card a person picked from the deck, that would be the color of the question and number they would ask everyone around the group.

Another event coordinator and graduate student in economics, Grace A. Fosu said the icebreakers “helped meet new people from different background with different perspective on issues.”

Some of those icebreaker questions ranged from asking about people’s favorite foods or movie to more academic questions like “why did you choose EIU?”

Fosu said she “enjoyed it” and kept laughing, laughing and laughing. The card question icebreaker game made her know different sides of people. This event was her first time, but she would do something like the Tarble Talkback again.

Sophomore student Ranosha Hall, majoring in marketing, said she came into the Tarble Talkback event to meet new people and has not been to a similar event like it.

Another activity was the cups challenge, which consisted of groups trying to stack cups in a pyramid form. Each member of the group of four was holding a string attached to a rubber band to be able to grasp the cup and help place it in a pyramid form.

After some time forming the cup pyramid, the groups had to fight against the wind, which would knock the cups down. Students and faculty connected by figuring out which strategy is the best to accomplish the task.

The group, along with Rehema Barber, director of Tarble Arts Center, was successful in completing the cup pyramid challenge. Prizes were given to Barber’s group of people.

Fosu said, “Encourage people to join activities like this to be open to other sides of their comfort zone.”

As the event was ending, people were exchanging contact information and leaving together.

Reflecting on the experience, Hall said, “Now if I see  (students) around campus, I’ll say, ‘hi!’”