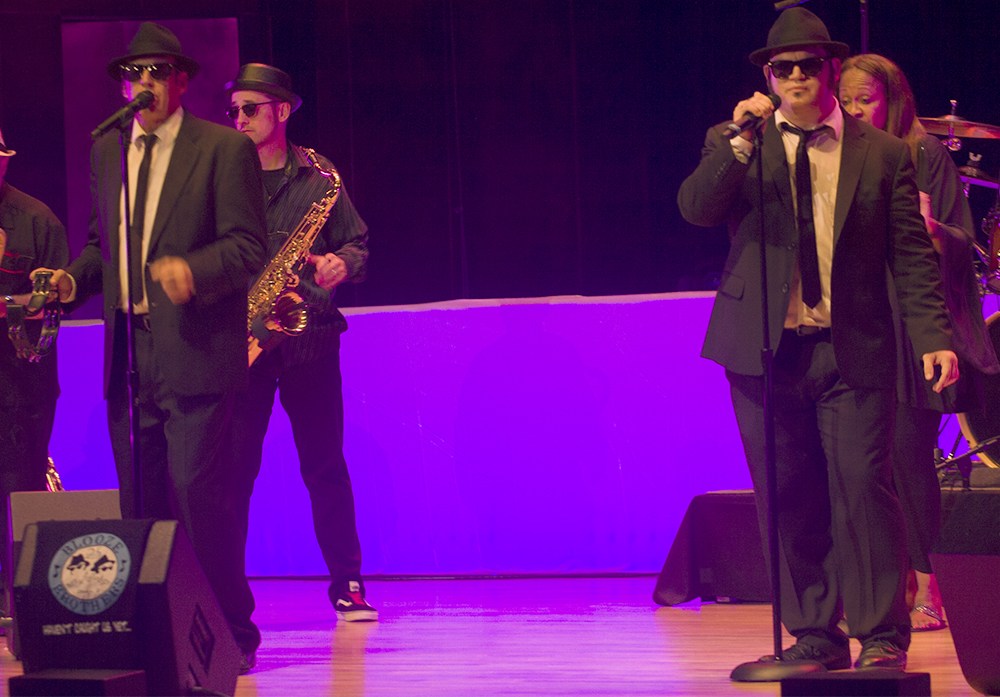 The Blooze Brothers perform Saturday night in the Doudna Fine Arts Center. This performance is the first of the Doudna's season.

The Blooze Brothers, a band that was created as a result of a last-minute Halloween party idea, led the audience in a jazz, rock and soul packed performance Saturday night in Doudna Fine Arts Center’s Dvorak Concert Hall.

Chuck Little, who performed as Elwood Blooze, said after receiving praise from a Halloween party performance, he and his brother-in-law decided to form the band.

“I was in a band with my brother-in-law and we went to this party,” Little said. “I had some cassette tapes and I told him, ‘Let’s put on some black suits and work out a routine and entertain our friends at this party.’ It was a spur of the moment.”

He said that everyone loved it, so they end up doing a soul act together for two years. Then, they finally decided to make a band together.

While at Eastern, the band performed a variety of songs including: “I’m A Soul Man,” “Respect” and “Sweet Home Chicago.”

While audience members danced and sang along with the lead vocal band members, members came off stage to dance or play instruments in the crowd.

Throughout the show, Little and Kevin Pollack, who performed as “Joliet” Jake Blooze, danced and sang across the stage with loads of energy.

They said that when it comes to rehearsals the band has other shows outside of the Blooze Brothers, which causes them to practice on their own.

Little said on average, the band rehearses about three times a year before each performance.

Later, he and Pollack said that their band has professional musicians and they have been performing for so long that they have nearly perfected their performance.

Junior English major Emily Oldham said she was a huge fan of the movie and the concert did not disappoint.

“I loved it,” Oldham said. “It was a wonderful way to get out and experience, and I plan on coming back and seeing other performances.”

Lead vocalist Sheila Pepple, smiled and laughed on the stage, and said she sang the songs for the audience and no one else.

Little said that out of all the songs he has performed, he does not have a favorite one, but the House of Blues is significant as a result of the band’s roots in blues music.

“Any time you play the House of Blues it’s an honor,” Little said. “It is a special and almost religious experience, whenever we perform there.”

Pollack said people who are considering the performing arts as a career should pursue their dream.

“Art is struggling currently in our country,” Pollack said. “That’s why you should go after your dream, no matter what anybody tells you.”

Little went on to say that when going for your dreams do everything in your power to learn whatever it is you need to achieve it.

“With music, learn to play as many instruments. Do everything, live,” he said.

Savanna Henderson can be reached at 581-2812 or [email protected]