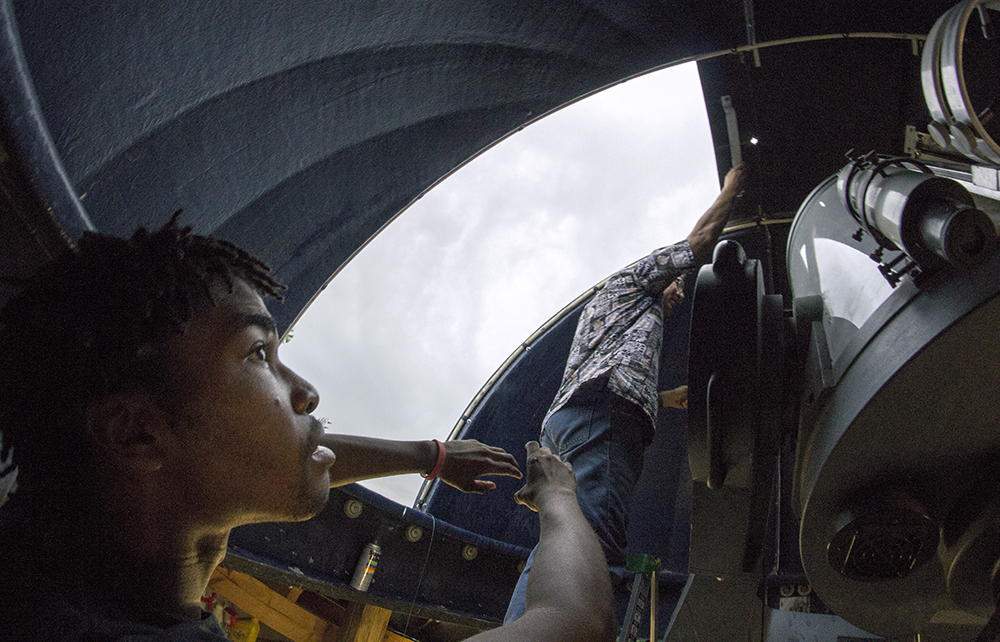 Nathan Barnett-Bishop, a junior engineering major, spots his adviser Douglas Brandt, professor in the physics department, who was struggling to get the hatch of the observatory closed to prevent rain from getting inside and damaging the telescope. “I’m just figuring it out as I go,” Brandt said after explaining that many of the faculty members who have more training in the observatory went farther south for their eclipse viewing.

Not even pouring rain stopped hundreds of people from coming out to watch what ended up being a unique and inspiring sight for many — a solar eclipse on Eastern’s campus.

Though it did start to rain during the first part of an eclipse-viewing party by Campus Pond, it cleared up just in time for the eclipse to reach its peak at 1:20 p.m., allowing attendees to experience 95 percent totality.

People packed the Campus Pond pavilion as the rain came down harder and harder, eventually emerging as the sun came out to view the eclipse.

As they stared, eyes —with protective glasses on— glued to the sky, people could be heard shouting “It’s so cool,” and calling their friends over to have a look.

The 400 glasses the university was giving out as a part of the event ran out quickly, physics department chair Steven Daniels said.

Daniels said that meant there probably were about 600 people at the viewing party.

“It’s been quite an experience,” he said. “A lot of community people, a lot of students (came). It’s all great.”

Running out of glasses did not turn out to be a problem, however, as people shared them with each other and took turns watching the sun.

“We got together to share an experience that only happens every few decades,” she said.

Like others at the event, she was initially worried as the rain came pouring down.

“I was so excited when the storm cleared out and we had some sun come in and could actually see it,” Murray said. “It’s just beautiful. I might have to write a poem on it…It’s pretty amazing.”

Michael Hughes and his wife, Pat Hughes, both Charleston residents and Eastern alumni who met at the university, had been sitting in their truck during the rainfall.

“We were thinking, ‘Oh, no, we’re going to miss (the eclipse),’” Michael Hughes said.

Though the two planned to be in Carbondale with friends, those plans fizzled when their friends became sick.

However, Pat Hughes said she was glad she could see the eclipse at her alma mater.

“(In college) I didn’t think I’d be out here doing that,” Michael Hughes said.

“It’s not something you get to see every day,” Retter said about seeing the sun with eclipse glasses. “It blacks out everything — it kind of looks like when you look at the moon in the night sky.”

Many went to experience the eclipse by watching it through a telescope at the Observatory.

Robert Chamberlain, a physics professor, said what people saw in the telescope was the part of the sun which was not being obstructed by the moon.

“What this telescope is doing is zooming in on it,” he said. “If you look in it, you’ll see the crescent in more detail than you would if you just took a look at it with glasses.”

While the weather did make things a little more difficult, with everything having to be taken down and put back together at one point, a lot of people were still able to take a look through the telescope.

“People have been impressed,” Chamberlain said. “Usually you think of the sun as sort of this unchanging entity, but you’re actually able to see on this rare occasion the moon covering up part of it-you do get to see this nice eclipse.”

Paige Anderson, a transfer student majoring in biological sciences and minoring in astronomy, was excited to look through a telescope for the first time.

“The fact that I get to see an eclipse through the telescope for the first time ever… is super amazing,” she said. “It’s something that not a lot of people get to experience, especially in North America, and especially so close to home.”