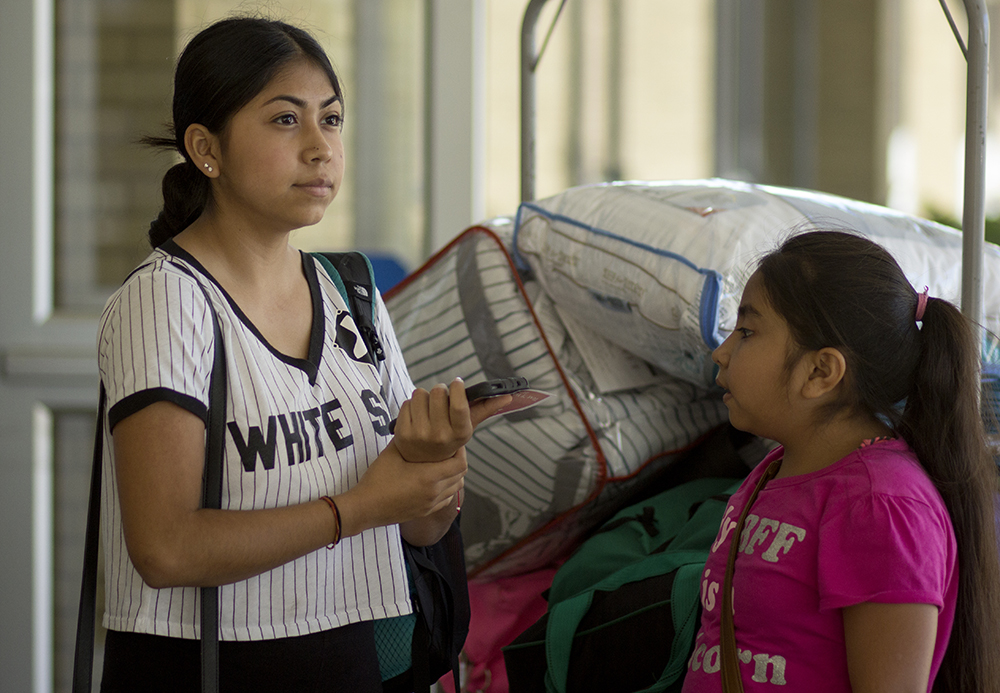 Yarely Robledo, a new freshman, watches several students unload their cars in front of Andrews Hall Thursday during move-in day while her younger sister Nataly asks her a question. Robledo said she is nervous about starting college but is ready for the new experience. Her father, Filibento Robledo, said she is the first daughter to go to college and even though it is sad to see her go, he said it was time.

Eastern’s campus buzzed with activity Thursday as students were busy moving in and getting settled for the new year.

Panther Prowl leaders and Panther Pals helped students unload their luggage and move into their rooms, guiding traffic and answering questions throughout the day.

Helping new students move into the residence halls helped remind Viernum of her first Move-In Day as a freshman.

Freshman year, Viernum remembers being scared when first moving away from home.

“I didn’t want my parents to leave,” she said. “This year, it’s like ‘Hey, I’m ready to see all my friends again…get the year started. Freshman year I had no idea what I was doing. Senior year, I was like ‘Oh, I got this.”

Prowl leaders moved in on Sunday last week to train and get to know each other.

“I’ve been getting all antsy for (the year) to start, (and to start) getting students moved in,” Viernum said. “It’s much better having students here than having campus be empty.”

Lakedia Prentiss and her daughter, freshman undecided major Tatyana Hyde, got up at 3 a.m. and left the house at 4 a.m. to get to Eastern.

“She was the first one to check in,” Prentiss said about her daughter.

The two ended up getting Hyde all moved in a little after 10 a.m. on Thursday.

Prentiss, who already has one daughter who is a sophomore at Indiana State University, said she is excited to see Hyde continue her education as well.

“I want her to get the experience, but I’m definitely going to miss her a whole lot,” Prentiss said. “Every day I’ve been telling myself she’s coming here for her education, (that) it’s something she has to do, that she’ll be back home for the holidays.”

This was Prentiss’ first time moving someone into a residence hall, as her other daughter at Indiana State lives in her own apartment.

“This is a little different for me,” Prentiss said. “(But) I think (Hyde’s) going to have a great time.”

Hyde was hanging up clothes and putting her items away as her younger siblings, who came along to Charleston, watched her.

Though she admits they can be annoying, Hyde said she is still going to miss them.

What Hyde is most excited about now is finding her self in college.

“I’m most excited about getting involved, trying to meet my teachers, grow a relationship with them,” she said. “I just want to make it — I want to graduate in four years and make my mama proud.”

“I really want to be on the Dean’s list,” she said.

Booker moved in Wednesday as a part of the Gateway program and said she really thinks the program will help her keep her grades up.

“It’s a good feeling,” she said. “I’ve been wanting this for a while.”