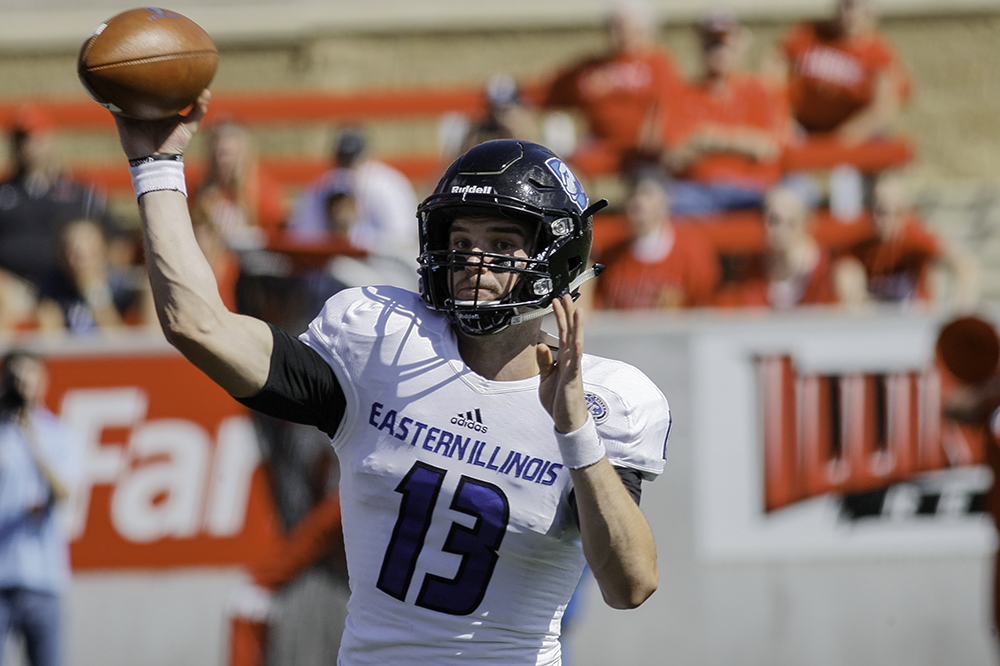 Senior quarterback Mitch Kimble attempts a pass during the first half of the Panthers’ 24-21 win over Illinois State Saturday, Sept. 17 at Hancock Field in Normal. The Panthers will lean on Kimble this year to guide the team after injuries limited his playing time in 2016. The QB completed 112-of-190 pass attempts for 1,414 yards and 13 TDs in only seven games last season.

It goes without saying that last year’s Eastern football team fell short of expectations, especially with the talent the team possessed, offensively and defensively. The Panthers just had too many bumps in the road to find a steady pace.

The finger could be pointed at having quarterback Mitch Kimble being plagued by the injury bug for much of the season, missing four games. The Panthers were 5-2 with him in the game but ended up finishing the season 6-5.

Kimble was a dual threat quarterback, with the ability to rush for yards and score. He also had a solid arm and racked up two 323 passing-yard games.

Kimble is back to play his redshirt senior season for the Panthers, but loses three of his top targets from last year, including running back Devin Church. Church led the team in receiving yards, while putting together a 1000-yard rushing season.

Receiver Paul Gossage transferred out of Eastern and receiver Shawn Mitchell graduated. Both receivers had over 200 receiving yards, even though they combined for only one touchdown.

Defensively, the Panthers will go into 2017 without its leading tackler from last season, linebacker Seth McDonald. But Eastern’s defense will stay strong with the return of senior linebacker Nick Horne and senior safety Bradley Dewberry.

Eastern’s defense was fourth in points allowed in 2016 with 310, averaging 28.2 per game. There were times where the defense shined, but could not get over some humps that came about during the season.

Eastern was not a contender in the OVC last seson and missed the FCS Playoffs as well.

It was not the season that the Panthers should have had, but this year’s returners bring promising talent to the field.

The Panthers will square off with in-state rival Illinois State Sept. 16, looking to hold onto the Mid-America Classic Trophy that they won last season at Illinois State.

Eastern opens with back-to-back road games to start the season.