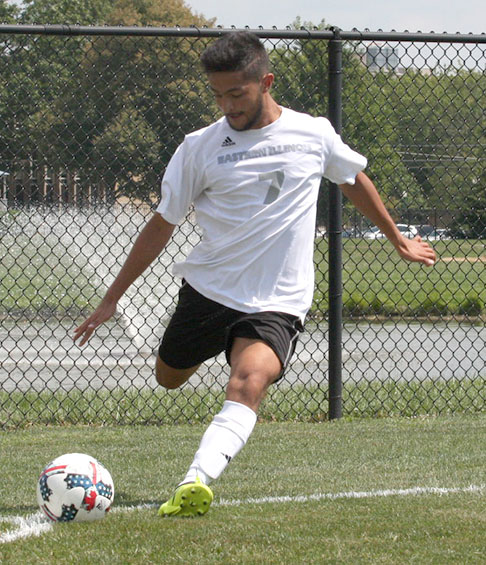 Sean Hastings| The Daily Eastern News Sophomore midfielder/forward Andre Nappa sends in a corner kick that was headed twice for a near goal Tuesday at Lakeside Field in the Panthers’ 2-0 win. The second header hit the crossbar.

Both the offense and defense clicked for the Eastern men’s soccer team in its final exhibition matchup in a 2-0 win over St. Xavier University Tuesday at Lakeside Field. The regular season begins Aug. 25.

Eastern limited its opponent to just one shot on goal defensively and scored two goals in 10 minutes during the second period to lift itself over St. Xavier.

Neither teams’ defense wanted to crack in the first period. They combined for just two shots on goal and it was not until the 48th minute of the game that Eastern sophomore Alessandro Corti ended the scoring drought, heading in a pass from red-shirt sophomore Christian Sosnowski, burying the ball in the right side of the net.

Overall, Eastern fired 16 shots and eight on goal with seven in each of the last two periods, a welcome change of pace on offense in the eyes of coach Kiki Lara.

“We have struggled scoring goals in the past and I think that is something there that we really want to highlight. Honestly, it was good to get goals through the run-a-play and it was good to get goals through the set piece,” Lara said. “It can be like rocket science to get everyone on the same page, to get towards the goal. Like I said, doing it with a couple of athletes is one thing, but doing it in sustainable ways is difficult, and that is what we are after.

The exhibition gave Lara one last valuable look at his roster before the regular season begins, trying out different players, including using two different goalkeepers.

“Everyone is working hard and everyone has earned a chance to get on the field,” Lara said. “So, it was a nice benefit for them to get on there and represent the program.”

Defensively, the team played up to their reputation in front of defensive anchor and senior goalkeeper Mike Novotny, who played the last two periods of the game in relief of redshirt freshman Jonathan Burke.

“Novotny is a big-time player and he is a big-time leader and we are going to lean on him quite a bit,” Lara said. “We are very confident with what we have in front of him and like I said, we are educating everybody every day and everyone is ready to go. And they will be ready to go and step in in front of Novotny and protect Novotny as much as possible.”