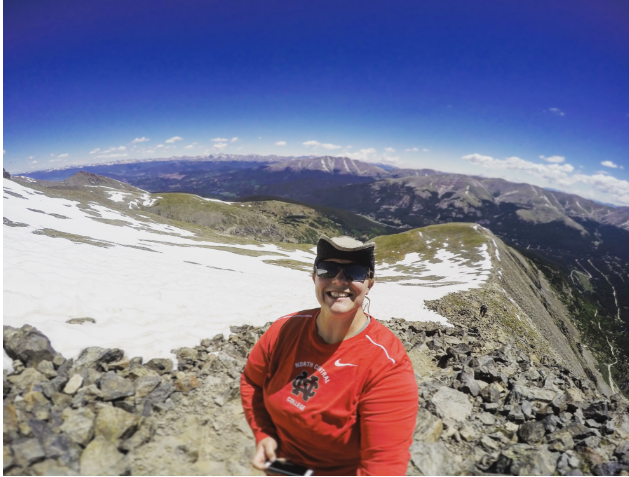 Lydia Pond takes a picture on Mt. Quandary in Colorado on one of her June training trips. Pond has been training to climb Mt. Kilimanjaro in August, which she is doing to raise money for Parkinson's disease research.

Eastern alumna Lydia Pond (‘09,’10) is no stranger to new experiences.

According to former rugby teammate Katie Anderson, Lydia Pond joined Eastern’s team during her freshman year even though she had never played before.She’s also been climbing mountains since she was a junior at Eastern and took a group of students to Africa on a missions trip during her career at North Central College.

This summer, Pond gets another new opportunity as she climbs Mt. Kilimanjaro to raise money for Parkinson’s disease research through the Michael J. Fox Foundation.

Pond has been raising money through a fundraising page on the Michael J. Fox Foundation’s website and will leave for her trip on Aug. 4.

She said it is exciting, humbling and “kind of scary” to be one of 12 people making the trek.

However, she said the trip is not about herself, but her mother, Melcy. Melcy Pond was diagnosed with Parkinson’s in 1997, when Lydia was 10-years-old.

“For two-thirds of my life she’s had it,” Lydia Pond said. “It’s hard for me to remember a time in my life when she didn’t have it.”

One of the hardest things Lydia’s mom has had to deal with is going on disability from being a civil engineer, a career she had for decades.

“She had to give her her livelihood and part of her identity as a working mom and engineer,” Lydia said. “I think she probably had 15-20 years of engineering on her- but she can’t do it anymore.”

Though Melcy Pond is the kind of person who keeps to herself, according to her daughter, in years since she was diagnosed with Parkinson’s, she’s done her best to help others with the disease.

Ever since she was diagnosed, Melcy has taken part in numerous research studies and goes to support groups for newly diagnosed patients to talk about her experience.

“They can see 20 years into the disease, she’s still functioning, she can walk, she can talk,” Lydia Pond said. “She silently gives people hope.”

Though Melcy is a little nervous about her daughter climbing the mountain, she is also excited.

“My mom would probably love to climb Mt. Kilimanjaro but she physically can’t, so I’ll do it for her,” Lydia said.

To go on the climb, part of the requirement is raising $10,000.  Lydia met that goal in 5 days, with the help of her family, friends and co-workers though, her own personal goal is a little higher- $15,000.

People can still donate, even for a period of time after Lydia Pond actually climbs the mountain.

Through having people donate, Lydia Pond has been able to connect with friends who have also been directly affected by Parkinson’s disease, even when she hadn’t known they were dealing with it before.

“I’m very fortunate to know a lot of people and be friends with a lot of people,” she said. “I’m humbled and thankful people have taken the time donate to such a cause.”

To get ready for her trip, Pond has been working on finalizing everything, making sure she gets a new backpack and sleeping bag as well as other last-minute parts.

“I’ve been double checking every couple days, making sure my passport hasn’t disappeared,” she said.

In the past two months, Lydia Pond has gone to Colorado three times to train. Other than that, Pond said she is just trying to be outside and do as many different activities as she can.

Along with taking plenty of layers of clothing, cameras, snacks and water bottles, she also always takes her brother’s hat with her when she travels, as he died five years ago in a motorcycle accident.

Though she is excited, Lydia Pond said she does not want to let the people who have been supporting her down.

She has not yet met all the people who will climb with her, though Lydia Pond said she is sure she will get to know them “really well” as they spend the 10 days together on the mountain.

At Eastern, she worked at the Student Rec and was an intramurals graduate assistant.

She was also in the recreation administration honors society, Rho Phi Lambda.

Pond played rugby as a freshman and was a walk-on in tennis her junior year, before taking time during her senior year to focus on internships.

Pond’s love for mountain climbing started the summer after her junior at Eastern when she did an internship in Colorado when a professor suggested it to her. “That was my first experience in and around the Rocky Mountains,” she said.“Being in the mountains is a very surreal and spiritual experience.”

Pond’s former rugby teammate said she was “speechless” when Lydia told her she was going to climb Mt. Kilimanjaro.

“She has seen all 50 states and has been to several countries overseas, but this was still a surprise,” Anderson said. “ I knew that the journey between accepting the opportunity to go on the trip and actually climbing the mountain would take a lot of hard work but I felt very confident that if anyone was capable it was Lydia Pond.”