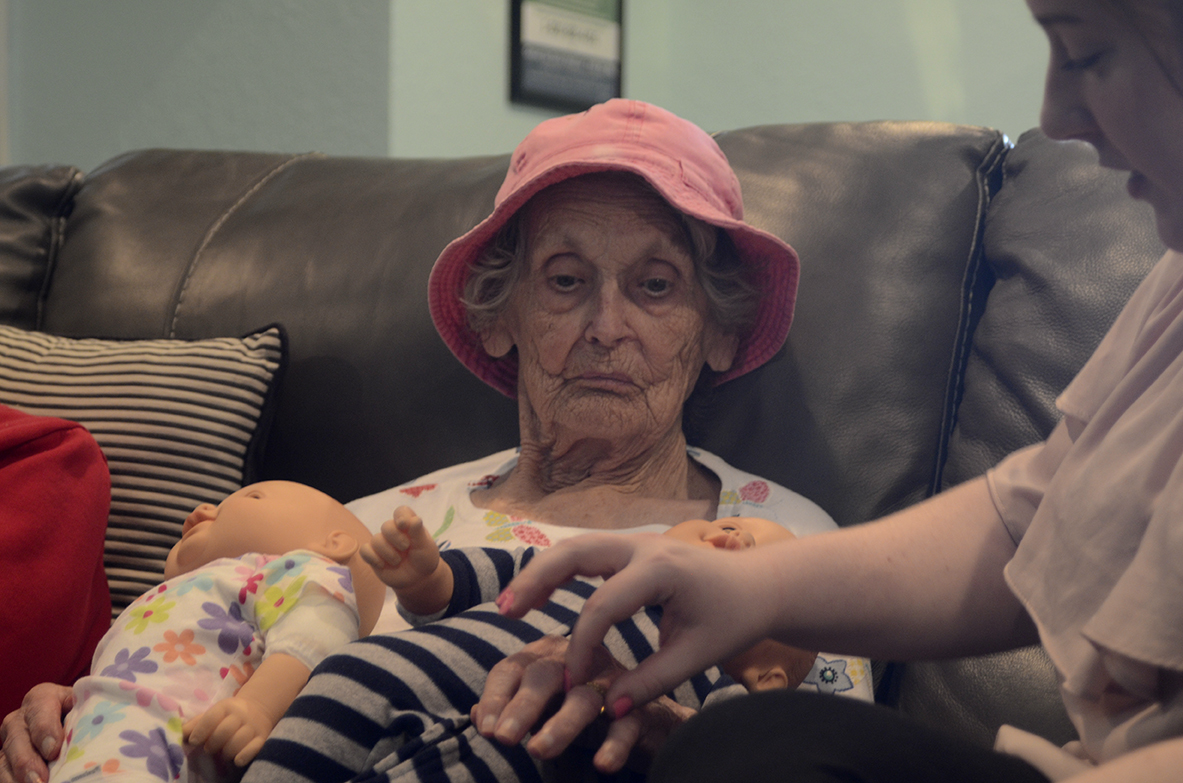 Maxine, a resident at the Arbor Rose Adult Day Care and Memory Care Home of Charleston, tells Erin Byrne, an intern, about her ring as she holds her baby dolls Wednesday afternoon.

With the help of three interns from Eastern, Arbor Rose Adult Day Care and Memory Care Home of Charleston will be host its first “carnival” from noon to 3 p.m. Sunday at 1911 18th St.

There will be games, food and drinks and all the proceeds from the carnival will go to the Alzheimer’s Association.

Maria Brown, a senior psychology major and intern at Arbor Rose, helped put together the event with two other Eastern interns and Tonya Green, executive director of the home.

Green said all the interns that work at Arbor Rose create a legacy of their own that they can pass down to the next set of interns and the carnival idea is Brown’s legacy.

Brown said the idea for a carnival originated while the interns, staff, residents and Green were on a bus leaving the Aikman Wildlife Adventure in Arcola.

It has been a lot of work planning the carnival, Brown said. Now, she and the other interns are putting together the final touches.

Prior to working at Arbor Rose, Brown, Erin Byrne, an Eastern alumna and intern and Madi Hahn, a senior family and consumer sciences major, never knew each other.

However, despite not knowing each other before, Byrne said they became friends and work off of each other by motivating one another.

“We all work really well together,” Byrne said.

The interns said  one of the reasons it was not as hard planning for the carnival was because they were all on the same page as a result of the connections they built with each other and the experience they have gained through the internship.

“We’re taking our experience and putting it toward a greater cause,” Byrne said. “Now it’s affecting us (on a personal level) and we want to raise as much money as possible.”

Brown said Eastern’s volleyball team and women’s basketball team will be volunteering during the carnival by working the different booths.

“It’s been a great connection with university,” Brown said. “Residents even went to (the) Spring Games, and its two things I love combined.”

Green said she hopes the carnival is successful so they can make it an annual summer event.

The Arbor Rose staff is asking for donations of $5 but will accept other donations.

“It’s going to be really exciting to see the community come out,” Byrne said. “There’s definitely still things to do over the summer and it’s definitely putting what we learned here with Alzheimer’s patients and putting it toward an awesome organization. We’re hoping to have an amazing turnout.”