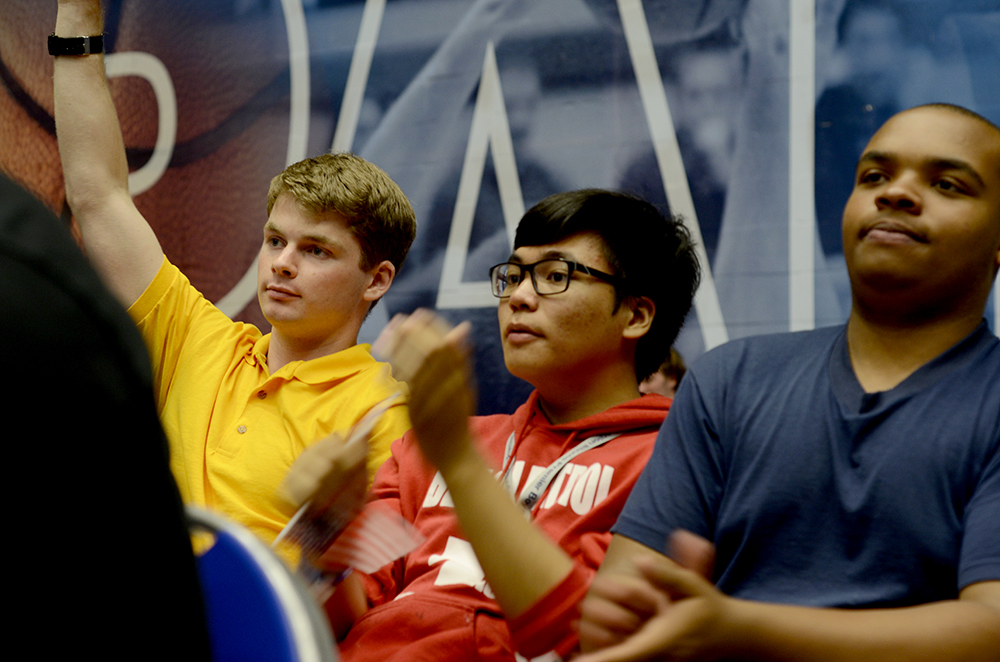 Casey Wells (left), a rising senior at Marian Central Catholic High School in Woodstock, raises his hand to ask Illinois Treasurer Michael Frerichs a question Thursday night during the Illinois Premier Boys State conference. Wells and his “commander” Joseph Douglas (right), a rising senior from Proviso East high school in Maywood, said one thing they took away from the week was the overall experience. “I’ll never forget this,” Douglas said as his teammates starred at him with admiration calling him their “master chief.”

From strangers to wishing they went to the same high school with each other; a group of high school juniors spent a week discovering the meaning of leadership and brotherhood during the annual Illinois Premier Boys State conference hosted by the American Legion.

As a way to show students how to establish and operate a government at the city, county and state level, Boys State teaches participants to learn by doing.

In a crowded and humid Lantz Arena, about 100 high school juniors spent their final night at Eastern listening to the words of Illinois Treasurer Michael Frerichs and described the experiences they encountered.

The group is divided up into eight counties that are then divided into three cities per county.

Douglas is the commander for his county and sitting with his team, everyone turning to see what he had to say, he said he was honored to lead his men throughout the week.

“I was quite blessed to have this opportunity to lead this team, Stelle County, to be the best they can be,” Douglas said as several members of his team smiled and laughed, calling him their “master chief.”

Throughout the week, the participants were involved in several activities that were aimed to teach about leadership and working with a team.

Aside from competing in different sports events, such as a volleyball match, which Douglas said his team took the winning title home; they also ran for office and sat in class learning about the role of government.

Program Director Jeff Brown said everyday was divided up into activities done in the morning, afternoon and in the evening.

During the morning shift, students have that classroom time to learn, then in the afternoon they can attend several seminars.

Each seminar taught subjects such as leadership, applying for college and practicing law.

Finally, in the evening students held mock General Assembly meetings where they had the chance to run for office and finishing the week by listening to a guest speaker, which was Frerichs.

In the gym, patriotic ballads surrounded the now tired looking faces, as several participants unfolded a large American flag over the top bleachers, waving it as the arena erupted with cheers and applause.

“He never gave up,” Douglas said in response to Frerichs’ speech, “and that’s the spirit that you should keep throughout your life if you want to achieve success.”

As he talked, Douglas looked at his team with a sense of pride. He nodded and laughed when they referred to him as a great commander or when they shared their experience.

“He’s master chief,” several said through wide grins, laughing and shoving each other while they sat in their blue painted seats.

Casey Wells, a member on Douglas’ team and a junior from Marian Central Catholic High School in Woodstock, said he learned during his stay that it is important to be involved.

“Make sure that you get yourself out there and to get out of your comfort zone and like the treasurer was talking about trying new experiences that interest you because that’s the best way you’re going to grow,” Wells said, standing out in his bright yellow polo shirt and looking to Douglas for encouragement to proceed with talking.

Douglas and other members of his team said they had a great time throughout the week and learned everything and anything, especially brotherhood.

They said they wished they went to the same high school together but regardless of circumstance, Douglas and his team still managed to foster a friendship after only a week together.

“It’s like what they taught me in ROTC: be prepared, keep that fighting spirit up and keep that warrior ethos in the back of your mind and always lead from the front,” Douglas said. “I took this into Boys State and that’s how I became the commander.”

Once again, Douglas smiled and after taking one last glance at his team he said he will never forget this week.