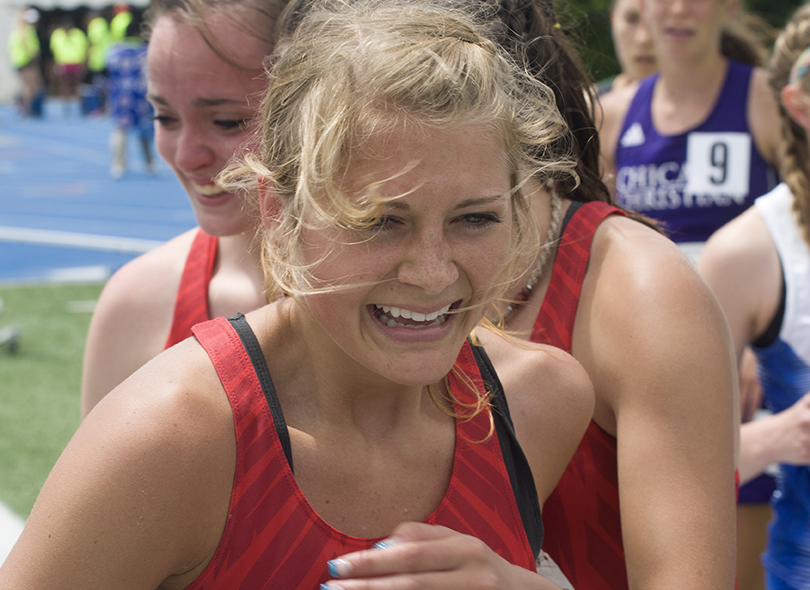 Eastern’s cross country and track and field coaches got a preview of their incoming runners at the girls’ state final this past weekend.

Seniors Chelsea Paulek, Kate Bushue, Shelby Siltman and Margaret McPherson all committed to running for Eastern before qualifying for the state competition.

While already signed to be a part of the Panther family, their state performances showed the coaches what they will be working with in the upcoming season.

Paulek comes in as a three-time, Class 1A, 4×800 meter relay state champion from Deer Creek – Mackinaw High School. The team was favored going into finals after an overall preliminary best of 9:51.16.

Paulek anchored the relay in both the prelim and final races, which led the Dee-Mack team to a state title, with a winning time of 9:40.25. But, according to Paulek, the race took some unexpected turns that made her question how important a state title was.

“I knew that I had to get the win for my team. We were too close, and I had to try,” Paulek said. “Springfield was in front and happened to trip over the inside rail, and as badly as I wanted to help her up I knew that was my chance to go for it.”

Sure enough, Paulek made her move and didn’t look back. She was also a qualifier in the 800- and 1600-meter open runs.

Bushue, Siltman, and McPherson all competed in the 2A section of the finals.

It was a battle to the finish for Bushue of Mt. Vernon High School and McPherson from Sterling High School in the 1600-meter final.

Bushue crossed the line eighth overall with a time of 5:16:06, and following close behind her was McPherson at 5:17.22. She took ninth overall.

As for Shelby Siltman, the prelims marked the end of her high school career as she missed the qualifying cutoff with a time of 5:50.56.

Ashley Gilmore, a distance runner from Freeburg, Illinois, has also committed to joining the Eastern cross country and track and field teams, but because of injury was unable to compete at the state final.

“It was amazing to watch these girls compete today,” cross country and distance coach Erin Howarth said. “We don’t expect them to come in being top seven, just the ability to be coached and a smooth transition into collegiate athletics.”

Coach Howarth also said it’s good to get such experienced runners with a number of talented seniors leaving the program.

In other IHSA News: