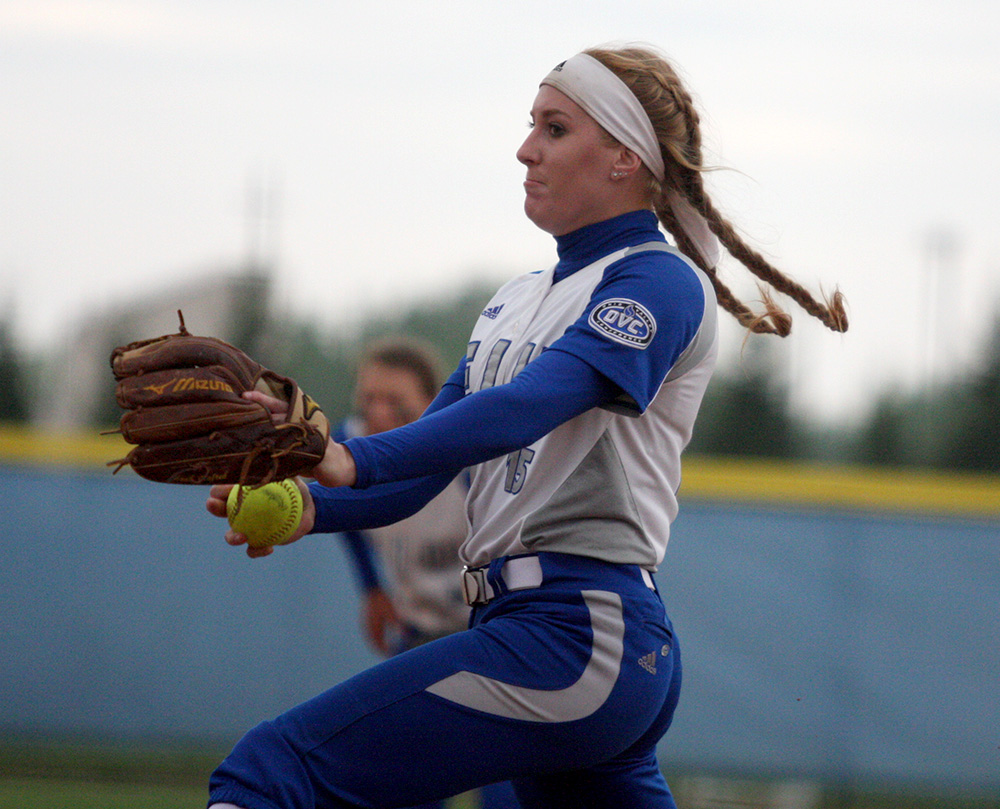 “April showers bring May flowers” could not be more true for the Eastern softball team.

And with the non-stop rain that occurred over the weekend, three out of the Panthers four scheduled games were canceled. The Panthers and Murray State were able to sneak in one game on Friday, but Eastern probably wished that one was rained out as well.

Murray State’s pitcher Mason Robinson threw a perfect game against the Panthers. The game only lasted six innings because the Racers were up 8-0, enough for a run rule.

It was her second perfect game of the week.

Nothing went the Panthers’ way that game. Aside from only having two hard hit balls that required the Racers shortstop and second basemen to make good plays, defensively Eastern was not on its game as well.

For starters, Jessica Twaddle’s home run in the first inning came with two outs and bounced off junior Taylor Monahan’s out stretched glove and went over the fence. Seven out of the Racers’ eight runs came with two outs.

The second game of the scheduled doubleheader was officially rained out around 8 p.m., but the game was supposed to start around 3 p.m. Eastern is desperate to play some games.

The games against Murray State were supposed to take place on Saturday, but to avoid that rainstorm they were moved to Friday to try and at least get one game in.

Rain flooded centerfield in the middle of the two games as well as other spots throughout the outfield, to go along with the flooded warning tracks.

With the amount of rain that came in this weekend, any game would have been lucky to get in. With storms always in the forecast, every game was either pushed up or pushed back to get around it.

Mother nature was not on Eastern’s side. Sunday’s scheduled games against Austin Peay were set for noon, pushed back to 2 p.m., then finally rained out at 1:30 p.m. The rain never quit Sunday morning.

On the bright side, the Panthers’ chance at an OVC tournament berth is not hurt by the canceled games.

Eastern is set to play Southern Illinois at home next weekend, finally getting out of this drenched month of April.

Every team in the OVC has played more games than the Panthers. Eastern is 9-4, but most teams will have played at least 16 games by the end of the weekend.

Eastern was on fire to start the season, winning nine of its first 10 games.

It was a quick regular season for the Panthers having this stretch of games canceled, and the regular season ends next weekend. Eastern is supposed to play Illinois Tuesday on the road.

*Some OVC teams were in rain delays/ not finished at time of publication. Numbers will reflect that*