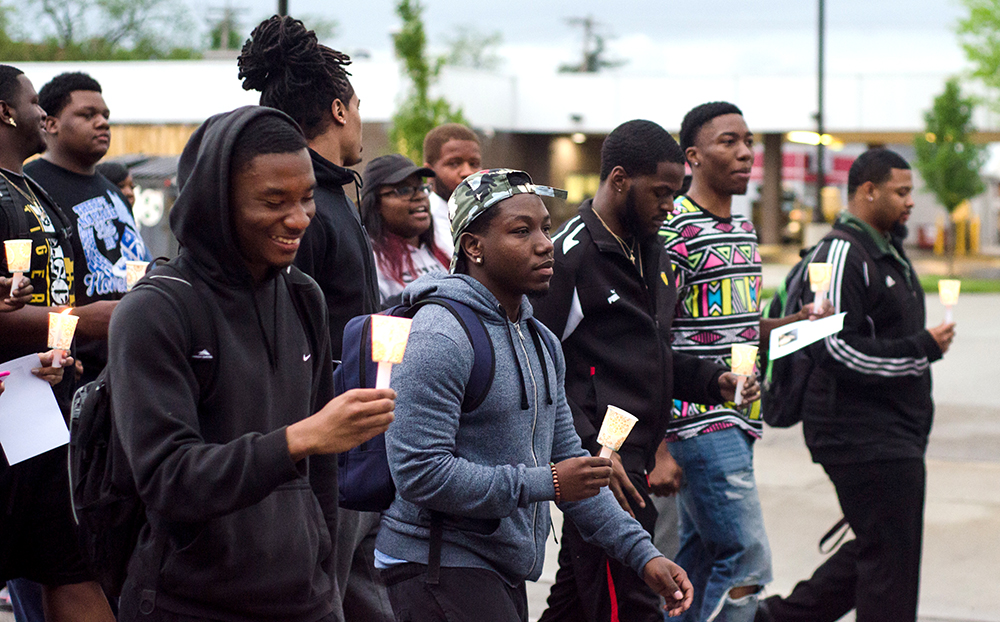 Senior Byron Edingburg was honored Tuesday night as the first graduate of Eastern’s class of 2017, as a large crowd gathered for his memorial service in the Grand Ballroom of the Martin Luther King Jr. University Union.

Eastern President David Glassman gave a diploma to his mother, brother and aunts.

Edingburg, set to graduate May 6, was pronounced dead early Saturday morning at Carle Hospital in Urbana after he was fatally shot during a party on Seventh Street.

“The world is lesser, because he is not in it,” Fuller said.

Bateman was surprised to have met another guy like him who shared the same love for anime.

“(Edingburg) took life as it came and did everything he could,” Bateman said. “He touched me in a way not many people have.”

Bateman said Edingburg had no comfort zone and was the type of person to make anyone a full meal if they came to his house.

One of Bateman’s favorite memories of Edingburg was when the two were walking past Thomas Hall and just stopped to watch a basketball game on the TV.

Edingburg was someone who did not plan things out and “took life as it came,” Bateman said.

Jaccari Brown, another friend of Edingburg’s and a graduate student in communication studies, said he still has not accepted the tragedy happened.

It is hard to meet someone as diverse and intelligent as Edingburg, he said.

Brown described Edingburg as someone who loved joking around and laughed at all jokes, even those aimed toward him.

Brown said all of his friends loved Edingburg.

“He was really funny, really weird—but a good kind of weird,” Brown said. “We shared a lot of good memories.”

History professor Jinhee Lee, who had Edingburg for multiple classes, said he came to her office Friday afternoon and spoke for an hour about his application for the

She said Edingburg wanted to help people in Ghana because he wanted to encounter the roots of his ancestors.

He always told jokes to lighten the mood, she said.

French said he loved making connections with everyone.

Edingburg spoke at on a study abroad panel last week about his time in South Korea.

Lee said at the panel Edingburg was very funny, effective and had a good time like he usually did.

He was a “natural public speaker,” she added.

French said Edingburg lived his life to the fullest.

“His soul, his spirit will live on,” she said.

Lee said at the beginning of the semester, she asked Edingburg’s class what their life goals were.

Edingburg’s was “to leave the place and people better than I found (them.)”

The crowd from the Grand Ballroom later made their way downstairs for a candlelight vigil.

Everyone made their way over to Seventh Street to pay their respects and honor Edingburg.