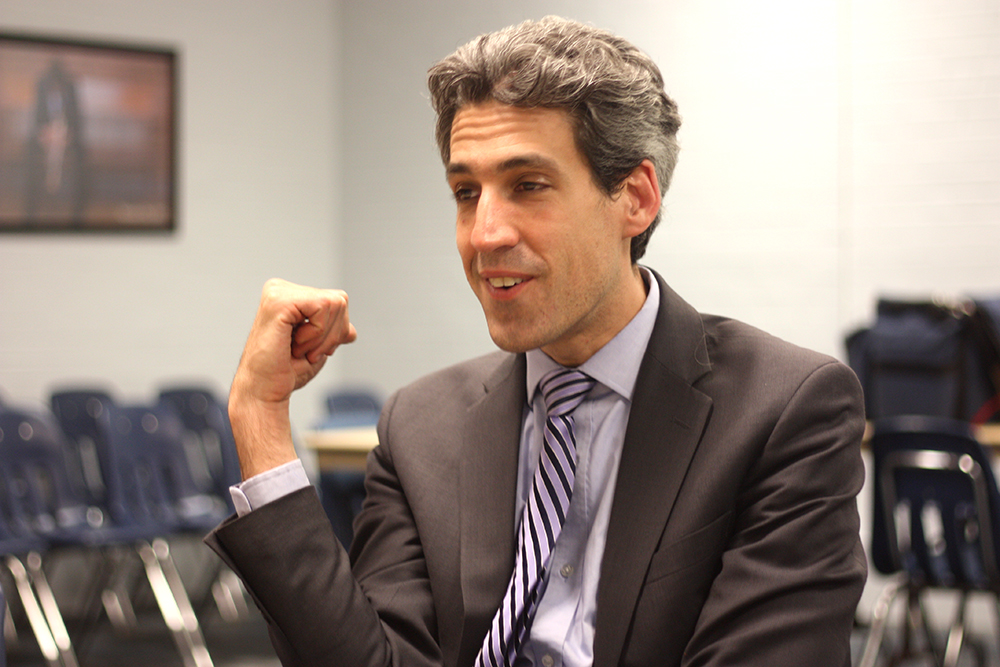 Olivia Swenson-Hultz | The Daily Eastern News Daniel Biss, a member of the Illinois Senate from the 9th district, speaks at Eastern about his campaign for governor.

State Sen. Daniel Biss, (D-Evanston) discussed his campaign for governor at a meeting with the EIU Democrats Tuesday.

Biss’s campaign is mainly based around reforming the “unfair tax system” and reforming Illinois’s flat income tax system, which has been done away with by the majority of other states, he said.

He objects to Illinois’s “unfair distribution of taxes” and believes that we should raise taxes for the wealthy, which would involve renovating the Illinois Constitution.

Aside from tax reforms, Biss also emphasizes the importance of wage raises as a key solution to Illinois’s economic state.

“States like Oregon that raise wages see an increase in populace. We need direct investments that increase jobs.”

Biss said he is also an advocate for free post-secondary education in Illinois, starting with community colleges, as he sees it as a necessary move in this day and age.

He also said he supports the equal distribution of state funding amongst schools, noting the inequalities in poor communities. He also believes that schools should invest in MAP grants.

Biss said he views Michael Madigan, who has been the Illinois Speaker of the House since 1983, as having too much power and believes that Democrats need to take a more progressive approach when in power.

He said he wishes for the Democratic Party to focus on compromise and coming up with and efficient solution to the budget crisis.

“When you have a problem you have to opt for the common solution,” he said. “The party has to look at where people are.”

Biss, a Harvard graduate, was formerly a math professor at the University Of Chicago before running for State Representative.