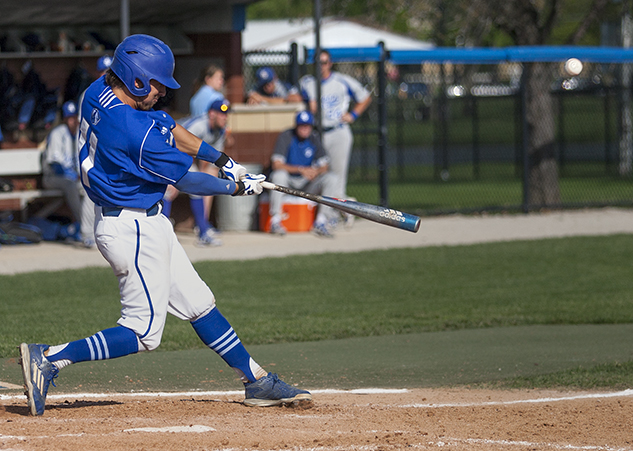 Sophomore Jimmy Govern flies out to left field in the 6th inning of the Panthers' game against Indiana State Tuesday at Coaches Stadium. The Panthers beat the Sycamores, 8-7, bringing their win streak to seven.

The Eastern baseball team has reached its longest winning streak since 2013, and once again it was because of the offense.

The Panthers have turned themselves into a roster of comeback kids as their seventh straight win came 8-7 over Indiana State Tuesday evening.

“Winning seven in a row is no easy task so we’re all pretty pumped as a team, and we’ve just had a great vibe about us finally being confident we’re going to win each game we play,” EIU sophomore Jimmy Govern said.

It sure did not come easy though as this one was back and forth from the very first inning.

A four-run third inning powered by Dougie Parks 11th home run of the season had the Panthers feeling good but in this game that still would not be enough.

With the Panthers trailing by one heading into the bottom of the eighth, it was two of the team’s hottest hitters this season coming through yet again.

After Joe Duncan brought in the tying run on a double to left center, Govern ripped a base hit through the left side of the infield to score the go-ahead run.

“I was just trying to get a pitch up in the zone to drive,” Govern said. “It’s the best feeling in the world to be able to deliver in those big moments late in games; that’s what you live for as a player.”

Govern has been living in that role for most of this season as he continues to see his batting average while ranking among the top ten in the Ohio Valley Conference for individual batting.

It was also another case of the Panthers’ offense keeping them in the game because they have the luxury to do so as of late.

Alex Cain had a shaky start on the mound for Eastern as he allowed five runs on six hits in four innings.

The bullpen was there to save him though as Devin Rose came up big pitching four innings while allowing just two runs before handing it off to the closer.

While Rose earned the win, and jumped to 2-0 this season, Alex Stevenson closed things out to earn his first save.

It seems as if everything continues to string together for this team right now, but their home field has been a special place to be.

The Panthers have 10 of their 14 wins coming from Coaches Stadium this season.

“I think we’re all just settling into our roles on the team at the right time,” Govern said. “We’re finally getting those big hits and big outs that we weren’t getting early in the year.”

With less than 15 games left to play this stretch is coming at the perfect time, and the chance of an OVC tournament berth is in reaching distance.

“The OVC tournament has been our goal the whole year and now I think we’re starting to all realize we can be a very dangerous team in that tournament.

The Panthers have a chance to extend this winning streak with another single-game matchup tomorrow against Saint Louis.