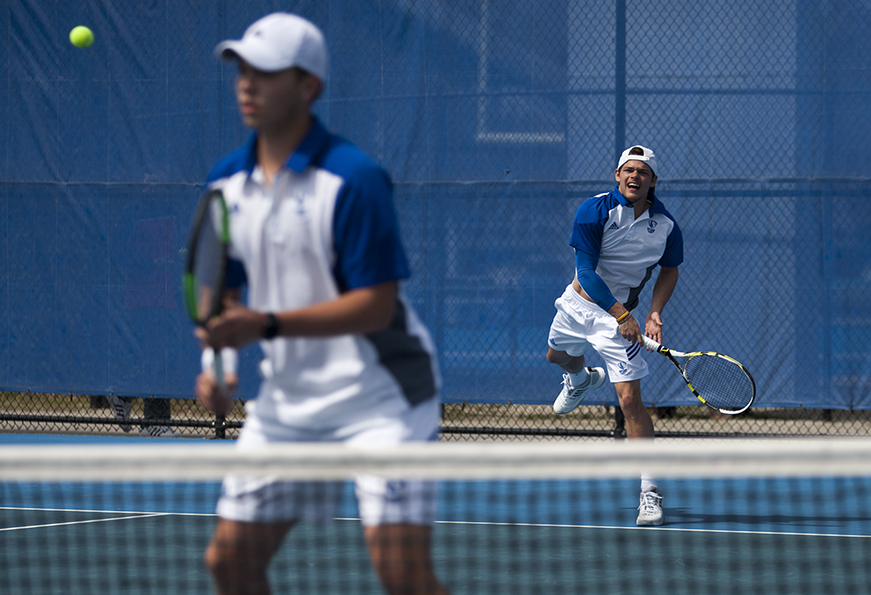 Junior Grant Reiman serves during his doubles match with freshman Gage Kingsmith April 8, 2017, at the Darling Courts. Reiman and Kingsmith were defeated by their Austin Peay opponents 6-4.

The men’s tennis team won back-to-back matches on Saturday for the first time this season. Saturday was senior day for Eastern.

Redshirt senior Jacob Wendell is the only senior on the team and was honored before the team’s second match of the day against the University of Illinois-Springfield.

Wendell will graduate after completing his student teaching this summer with a teacher certification in kinesiology and sports studies.

Wendell’s family and one of his best friends were in attendance to watch him play in his final collegiate tennis matches.

Wendell said it felt amazing to have his family and friend there to watch, but on top of that, it was great to finish his career with two victories in his doubles matches.

Wendell has had a great impact on his teammates, especially on the freshman who have said before that he has been great in helping them develop and grow as a player.

Wendell won both of his doubles matches over the weekend with duals partner junior Jared Woodson. The two played in two close matches to go undefeated for the weekend.

The duo won their first doubles match against Hanover 6-4.  Woodson also won his singles match against his Hanover opponent, Alec Bates, after the match was retired due to Bates rolling his ankle.

Eastern swept Hanover 7-0, winning most of the points without much trouble.

Eastern’s match against UIS came down to the last singles match, and it included three tie-breaking third sets in the singles part of the matchup.

Wendell and Woodson were able to play hard and take the doubles point for Eastern, after winning a close back-and-forth match 7-6.

The singles part of the competition was competitive.

Eastern needed to win at least three of the singles matches to earn the victory.  Kingsmith and Woodson lost their matches, while freshman Ferdinand Ammer won his singles match.  With the score tied 2-2 between Eastern and UIS, the other three matches were crucial for both teams, and UIS looked like it would have the advantage.

Eastern freshman Marko Janjusic won his first set, but both Reimans lost their first sets.  The three then did the opposites: Janjusic lost his second set and the Reiman twins won their second sets.

Grant fought for a bit in the third set, but he eventually lost. Trent had full control of the third set and won 6-1 over Christian Timm.

Janjusic was noticeably tired in the tie-break set, hitting serves and returns with less velocity than earlier in the match.

Down 5-2 in the third set against his opponent Sam Clarke, Janjusic started to make a comeback.

“To be honest, all I did was just not think.  I just played.  I just enjoyed playing my game and simply just felt calm, felt in control,” Janjusic said.

Janjusic’s comeback comprised of a five-game win streak, allowing him to win against Clarke 7-5, as well as finishing the comeback and securing the victory for Eastern.

Eastern will likely not make the OVC tournament, meaning the team’s season is most likely over.  The Panthers finished 5-19 on the year, and 0-6 in OVC play.