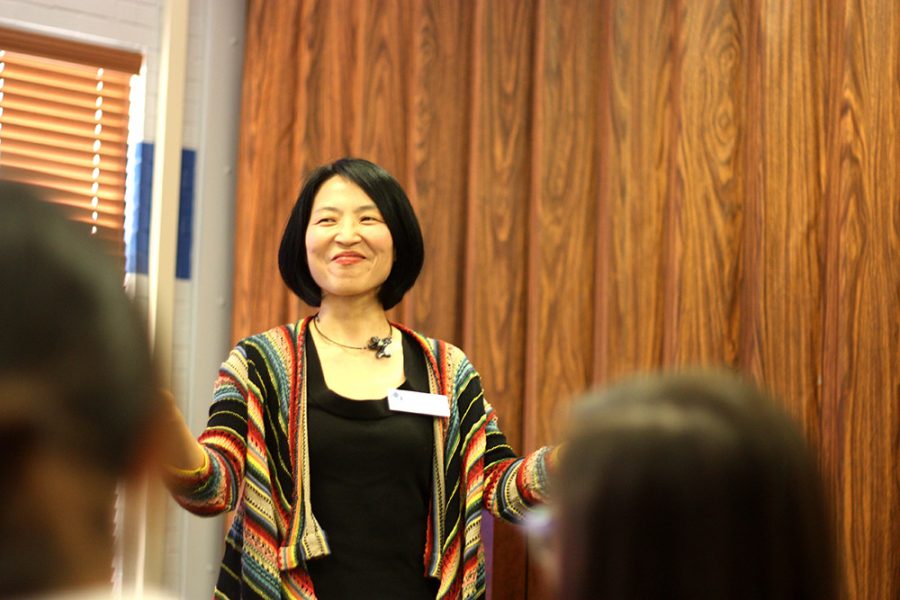 Jinhee J. Lee, coordinator of the Asian Studies program, discusses relations between China and South Korea and addresses the impeachment of the South Korean president at a panel Thursday.

The impeachment of South Korean president Park Geun-hye, relations between China and South Korea, and North Korean policies were among the topics of discussions by panelists, including visiting professors from China and Japan, Thursday as part of Asian Heritage Month.

Park Geun-hye, the first woman to be elected president of South Korea, was impeached after being accused of taking bribes from business conglomerates like Samsung, Hyundai and Lotte.

Mitchell compared Moon to Sen. Bernie Sanders of Vermont and predicted he would win the election in May.

Jack Cruikshank, a graduate student in political science, said he was unknowingly a part of a protest against the former president of South Korea while studying in the capital city of Seoul.

He said North Korea is a rogue state, meaning they do not engage in affairs with other countries like the United States does.

Cruikshank showed a video of CNN reporter Will Ripley in the capital of North Korea, Pyongyang, when the nation’s leader Kim Jong Un was cutting a ribbon to open a new street built by North Korean soldiers.

Ripley said he was given a press band to wear on his arm and was required to leave his phone in the vehicle.

In the video, thousands of people gathered to watch Kim cut the ribbon, as he is not seen in public often. After he cut the ribbon, he got in his Mercedes and drove away.

Cruikshank said North Korea wanted to show the world despite diplomatic isolation, the country can still complete projects like this thanks to Kim.

The people in North Korea are brainwashed by the government into thinking the U.S. is the root of all toil in their lives, Cruikshank said.

“They’ve been raised to think Western imperialism is the cause of all problems,” he said.

Cruikshank said the people are not crazy; they just respect Kim.

The biggest event happening in China is the construction of a megacity called Xiongan, Yu Yan, a visiting professor from Dalian Polytechnic University in Dalian, China, said.

Yu defined a megacity as a city with a population of more than 10 million.

She said the government’s reasoning to building this city is officials want to “explore a new model of optimized development in densely populated areas” and to restructure urban layouts in the Beijing, Tianjin and Hebei region by balancing them.

Yu said the massive population in China needs to be solved, so these megacities help solve the problem by encouraging people to move to these new cities.

Relations between South Korea and China are not the best right now, Brittany Dixon, a graduate student in history, said.

She said since the U.S. Army’s installment of the Terminal High Altitude Area Defense system, China has been on edge.

THAAD was put into place to shoot down missiles launched by North Korea and cannot launch attacks. It is meant to protect South Korea and Japan.

The Chinese government is worried the U.S. will use THAAD to shoot their missiles and to stop them from expanding into the South China Sea, Dixon said, so it has caused strain between China and South Korea.

Many Chinese citizens have shown support for the government by boycotting South Korean brands, music and travel to the area.

She said many advisers did not want to serve under Donald Trump because they disagreed with his new policies.

French said the younger generations are lashing out at this “underbelly of racism” in the U.S.

Mitchell said the U.S. government is known as a melting pot, but it only accepts those who fit into the standards of the typical white person they want to have living here.

Lastly, Fumitoshi Yoshizawa, a visiting professor from Niigata University of International and Information Studies in Niigata, Japan, talked about comfort women, sex slaves in Imperial Japan forced to have sex with the Japanese military during World War II.