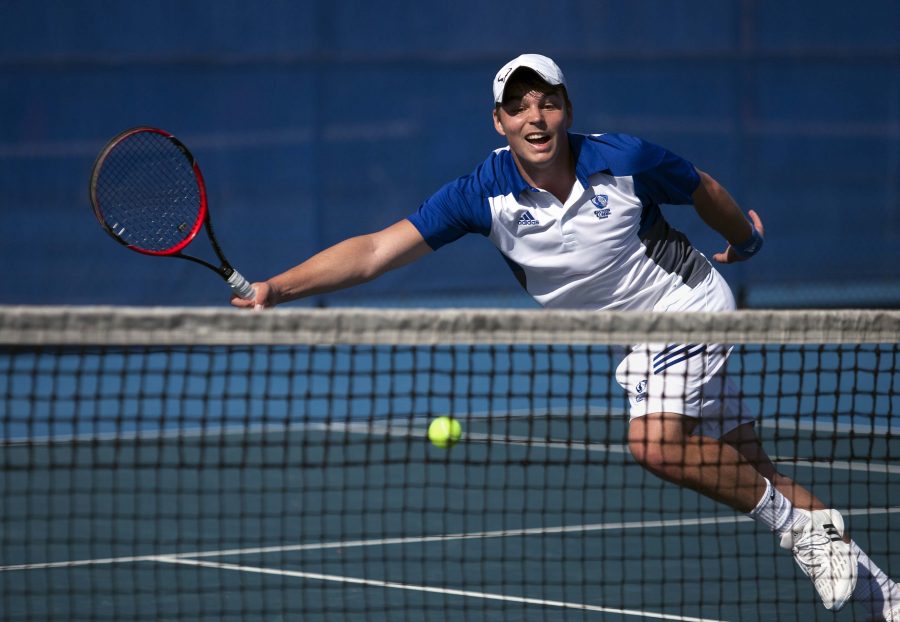 Freshman Ferdinand Ammer attempts a return at the net against Austin Peay's James Mitchell Saturday at the Darling Courts. Ammer fell to Mitchell in 3 sets, 3-6, 6-4, 1-0 (5).

Samuel Kercheval, coach of Eastern’s men’s tennis team, said it looks like the team will not make the OVC tournament, something he said was “all in our control.”

With the loss Saturday, the Panthers finished their conference play winless this spring season, while also finishing last in the OVC.

The match Saturday was consistent with the theme the team has played with in the later part of the season.

After the Panthers lost to Belmont and Tennessee State last weekend, Kercheval said the team has put itself into positions to win, but the players have not been able to get over the last hump to get the victories.

This was the case again Saturday against conference opponent Austin Peay.

The match was the last chance for the Panthers to get a conference win and keep their postseason chances alive.

In the doubles part of the contest, all three duos for Eastern grabbed an early 1-0 lead against their opponents.  Only the duo of junior Trent Reiman and freshman Ferdinand Ammer would get a doubles victory, after defeating their opponents 6-3.

The duo of junior Grant Reiman and freshman Gage Kingsmith led 2-1 in their doubles match, but after they committed some mistakes, they lost 6-4 after a late push for a comeback.

The third duo for Eastern, made up of junior Jared Woodson and redshirt senior Jacob Wendell, also led early in their match, but fell to their opponents 6-4 as well.

Kercheval said the doubles part of the match was a big deal, but the energy, from the beginning of the match, needed to be better.

Staying consistent with the theme of the late part of the season, the Panthers had chances to win in the singles portion of the match, but only a few of the players got wins.

After the strong doubles win, Trent and Ammer carried their play over into their respective singles matches.

Trent, as Kercheval put it, “smacked” his opponent, who beat him last year, in his singles match. He won in straight sets 6-1 6-2.

Ammer won his first set 6-3, but after losing the second set, he lost the match to his opponent in the tie-break third set.

Ammer’s opponent, James Mitchell, had a shoulder problem during the match and had to serve underhanded, something Kercheval said is psychologically “hard to get over.”

The other singles win for Eastern came from Woodson, who battled against his opponent to win in three sets.

Woodson narrowly won the first set 7-6 after taking an early 3-0 lead.  After losing the second set 6-1, Woodson came back in the third set with great intensity and won the third set and the match.

Kercheval said Woodson’s win was a big step for him, especially since he has gotten close to winning a lot lately.

Eastern had a lot of chances in the 5-2 loss, but the lack of energy at times and some mistakes hurt the Panthers in the end.

Eastern has its last two matches of the season Saturday, first at 9 a.m. against Hanover, then at 3 p.m. against the University of Illinois Springfield.