Survivor speaks up on sexual assault 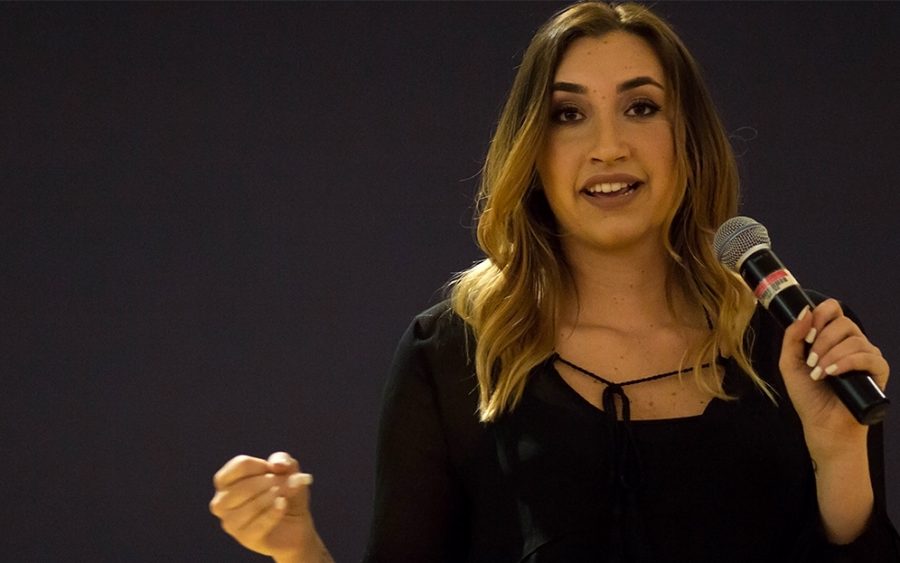 Nobody ever prepared speaker Jackie Mortillaro for the moment when a friend invited her into his bedroom to “ask her a question” and proceeded to violate her.

Mortillaro recalled everything Wednesday evening as a part of a series of events for the “It’s On Us” campaign to raise awareness of sexual assault.

She can remember the door locking behind her, the lights going off and even the Food Network channel playing in the background.

The first person Mortillaro opened up to set the record straight for her.

Mortillaro, already in a deep depression over her parents’ impending divorce, sank even deeper.

“I did not know what was happening,” she said. “I was not going to be the same person.”

In order to cope, Mortillaro turned to alcohol.

She missed a lot of classes – enough to fail out of nursing school – and refused to acknowledge the rape to her counselor.

Eventually, a voice in her head told her to kill herself.

That night, Mortillaro took upward of 40 antidepressants and instantly felt relieved. She texted “I love you” to her family and sent a message to the friend she had originally opened up to.

Mortillaro’s concerned friend called 911 and bolted over, staying with her until paramedics could rush Mortillaro to the hospital.

“Daddy, I was raped,” Mortillaro remembered saying when her parents made the drive from Chicago to the Cincinnati, Ohio hospital.

Mortillaro was eventually taken to a separate psychiatric ward to undergo therapy. There, she heard the words that stick with her to this day and have become her motto.

“Everything you bury grows,” one woman had told her during an art therapy session, comparing emotions to plant life.

Mortillaro said this concept is about both the positive and the negative.

Feelings of hurt and anger, left to their own devices, will fester, but so will feelings of hope and love, she said.

Mortillaro said mental health is a matter of choosing to act on the bad and accept the good.

Upon her return to Xavier University, Mortillaro said the school offered to conduct an investigation, which she eventually accepted.

The school questioned her for three hours on details such as what she was wearing and what the weather had been like the night of her rape.

Xavier’s investigation proved fruitless, however, when they informed Mortillaro’s alleged rapist of the allegations, prompting him to seek legal protection. With a formal court case underway, the university was forced to drop their own investigation.

Mortillaro consented to a lie detector test and told the truth.

The alleged rapist, who opted not to undergo the test, was let off.

“They couldn’t do anything about it,” Mortillaro said.

She returned to campus and occasionally encountered her assailant and his friends, including one incident in which they chanted “Free him.”

Mortillaro originally vowed to remain at Xavier University only if the alleged rapist faced charges, but she eventually decided to stay anyway.

“I didn’t want to give him the satisfaction,” she said.

Mortillaro theorized that her alleged rapist’s place on the basketball team played a key role in keeping him free.

“He was a huge moneymaker,” she said of the assailant. “Who cares?”

The events leading up to this led Mortillaro to pursue a degree in criminal justice. She graduated from Xavier in May 2015, which she considers a major victory.

“This is what I want to do with the rest of my life,” she said.