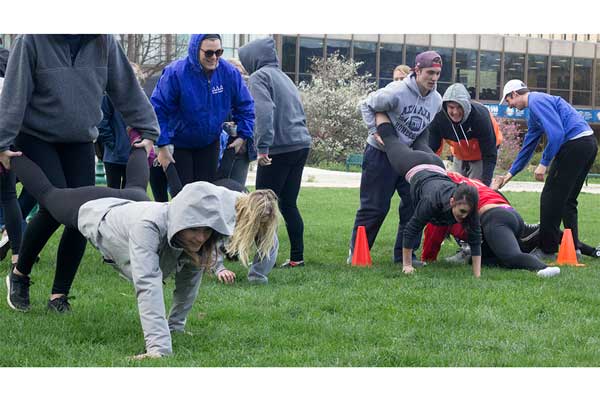 Members from several sororities and fraternities team up and compete in a wheel burrow relay Thursday during the Greek Week Unity Relay Races, one of the many events happening during Greek Week 2017.

“We kind of just show up and do what we’re told,” Morgan said.

With their teammates shouting encouragement on the sidelines, Sigma Alpha Epsilon worked alongside Sigma Sigma Sigma sorority to twist their way out of a “human knot” of tangled arms and win the second event.

Sigma Sigma Sigma member Ciara Lohman, a junior family and consumer sciences major, expressed her surprise when she and her teammates finished the human knot and were greeted with an uproar of cheering.

“I don’t know how we just did that,” Lohman said.

Delta Zeta’s Emily Schlitter, a junior kinesiology and sports studies major, competed in the three-legged race with Kappa Delta’s Hannah Horan, a sophomore accounting major. Despite being one of three pairs whose legs became detached, Schlitter and Horan won the race.

“It was fun, but the rope kept breaking,” Horan said. “It went by really fast.”

Delta Zeta and Kappa Delta also won the hula hoop race. They stood in a circle, locking arms and moving a hula hoop all the way around themselves.

“I was just hoping I didn’t kick any cones,” Pierce, a junior finance and accounting major, said.

In the fifth and final event, two pairs per team took the field. Like a standard relay, one duo took over for the other halfway through the race. One person in each pair held their partner’s feet in the air as the other moved them with just their hands.

“I was trying my best to cover as much land as possible,” Newtoff said. “I was pumped.”

Overall awards for the fraternities and sororities will be presented 12:30 p.m. Sunday, closing off Greek Week until next year.