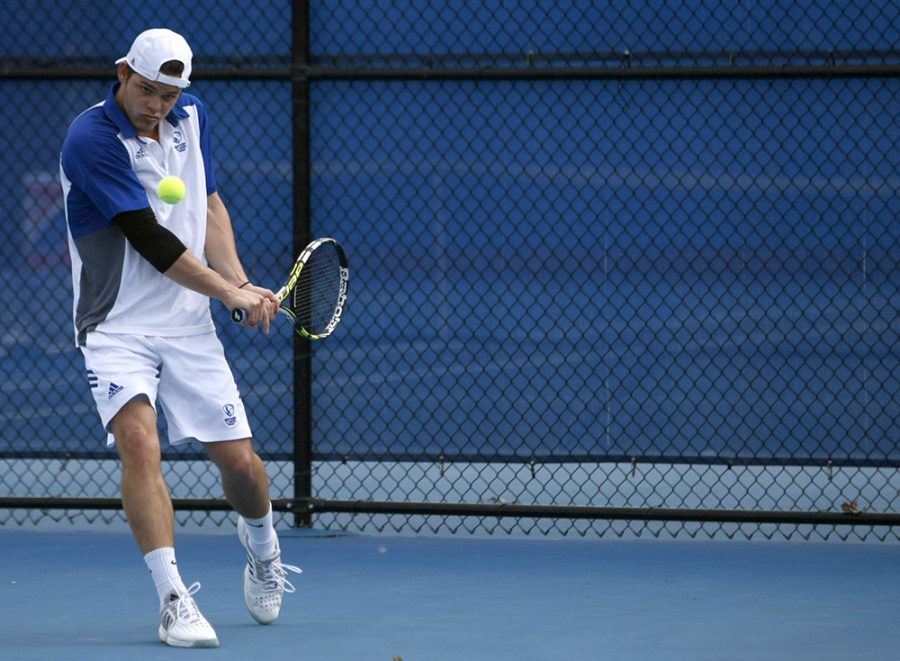 Junior Trent Reiman watches the ball before making a return during his singles match against Eastern Kentucky's Diego Asis on March 24, 2017, at the Darling Courts. Reiman fell to Asis 6-1, 7-5, in the Panthers' home opener.

Fresh off its third win of the season, Eastern’s men’s tennis team lost both of its weekend matches to OVC opponents. The matches against Belmont and Tennessee State were two chances for Eastern to get its first conference win; instead, Eastern now has an 0-4 conference record.

“There was a lot of emotion and pressure going in to these matches, especially TSU,” coach Samuel Kercheval said.

The Panthers played well Friday against Belmont, coming within one point of winning a few sets in the match. The Belmont Bruins blanked Eastern 7-0, the 10th time Eastern has been shut out this season.

Belmont brought the OVC Male Tennis Athlete of the Week in Cedric Dujacquier. He defeated Gage Kingsmith 6-0, 6-3. Kingsmith got his revenge though, defeating Dujacquier and his doubles partner with junior Grant Reiman in their doubles match 7-6.  This was the only victory Eastern got Friday.

Reiman fought well in his singles match as well, taking his opponent the distance in the first set before losing it 7-6.  He then lost the second set 6-1. Junior Trent Reiman also lost a close singles match, losing the first set 7-6 before the match was retired.

Junior Jared Woodson and redshirt senior Jacob Wendell lost their doubles match 7-5; another close loss the Panthers had Friday. Saturday, Eastern lost to Tennessee State.   Tennessee State got its first conference win of the season, improving to 1-1 in OVC play after defeating Eastern.