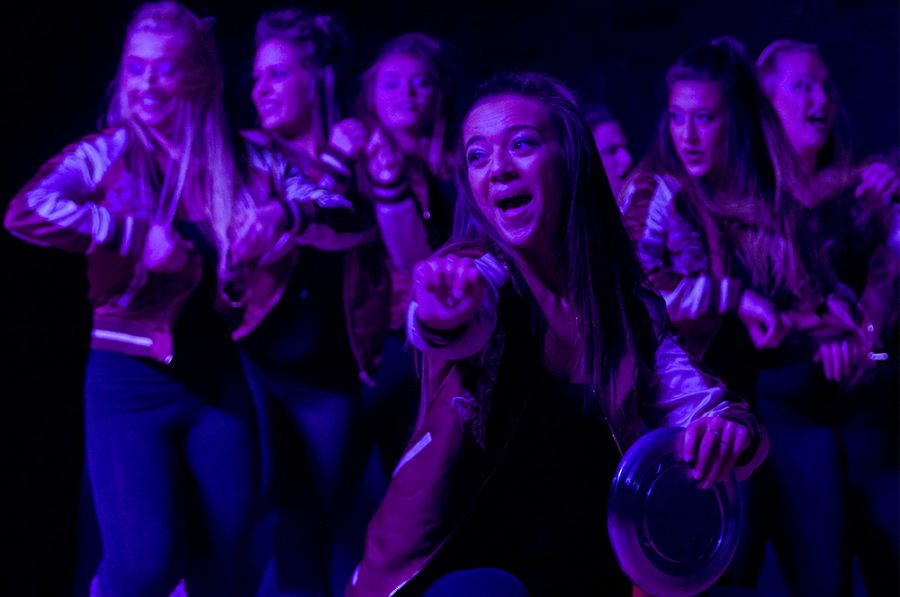 Alpha Phi sorority performs their Airband routine for Greek Week. They ended up placing first in the sorority division, with Pi Kappa Alpha getting first for fraternities.

Alpha Phi and Pi Kappa Alpha danced their way to victory Friday night as Greek Week kicked off with the annual Airband competition.

Kami Dally from Alpha Phi and Shaun Hughes from Sigma Alpha Epsilon from were also announced as Greek Week King and Queen.

The team celebrated their win with elation as they hugged and posed for pictures.

Kailin Haugh, a senior nursing major from Alpha Phi, said it was fun because a lot of members came from dance backgrounds.

“It really comes from within, and it’s a great way for us to come together,” added Gianna Coco, a senior psychology major.

The winning fraternity, Pi Kappa Alpha, dressed as masked ninjas as they kicked and fought their way through songs including “Go Ninja Go” and “Good Feeling.” Daniel Hernandez, a senior psychology major, choreographed the dance. This year’s Airband was his third time coaching and winning Airband.

“We bounced back and forth with our different roles, such as providing props. It took about 7-8 weeks to put together,” he said.

He said he wanted to put on a ninja-themed dance with his team last year, but they could not find enough music.

Some chapters had been working since Feb.1 to show off their choreography and dance skills. The production kicked off with Kappa Delta, who shook and twirled their way through 80’s songs such as “Feelin’ Hot Hot Hot” by Arrow to tunes by Pitbull. Sigma Chi performed a money-themed dance, strutting onto stage as they tossed cash and performing hip-hop songs from “Bills” to “Gold Digger.”

Some other notable acts include Alpha Sigma Tau who got down with ’80s dance moves, leather jackets, bright pink leg warmers and high ponytails to songs such as “Kids in America” to “Girls Just Want to Have Fun.” Lambda Chi Alpha came on stage adorning white jackets, waving their arms to the Backstreet Boys.

Sigma Sigma Sigma started off their dance acting as if they were emerging from an insane asylum in disheveled pigtails, baggy sweatshirts and torn leggings as they danced erratically to songs like “Outta Your Mind” and “Disturbia.” There was also Delta Chi, whose dance featured floor rolls and booty shakes to songs like “Shake That” and “Gas that Up.”