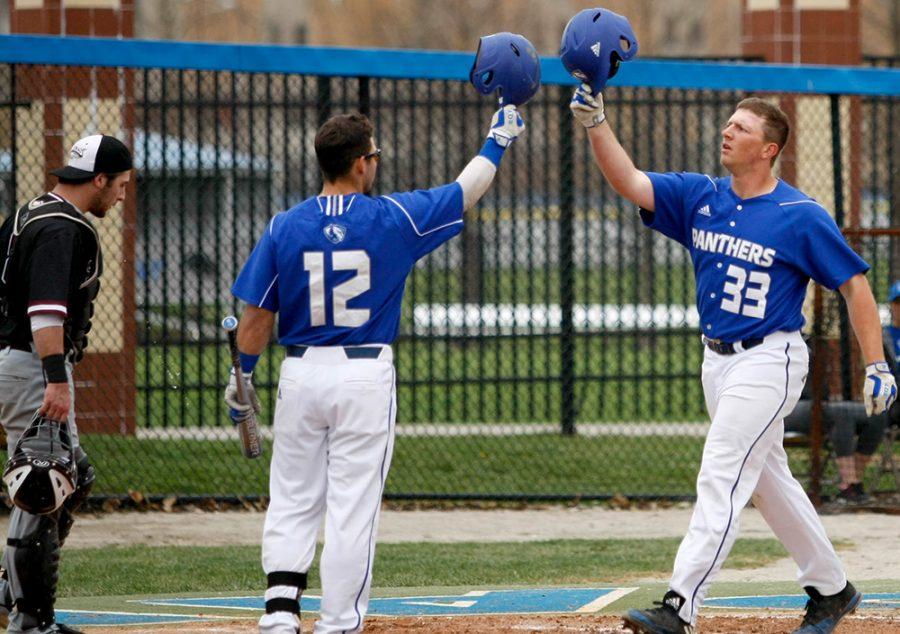 Junior Matt Albert is congratulated by teammate Frankie Perrone after his solo homerun in the bottom of the second inning Tuesday at Coaches Stadium. The home run was Albert’s seventh of the season.

In a season where wins have been hard to come by, the Eastern baseball team has searched for other reasons of optimism.

The Panthers may have found just that on their home field.

Eastern knocked off Robert Morris-Chicago at home Tuesday evening in a comeback 12-4 win, and it was all thanks to some power hitting.

Hitting homeruns was something the Panthers lacked a year ago, but in this game five runs were in credit to them.

The first was a solo shot from Matt Albert to put Eastern on the board, and the second was a game-sealer as Dougie Parks ripped a grand slam over the outfield wall.

Albert is a junior college transfer and in his first year with the Panthers he has been on a tear at the plate when it comes to hitting homeruns.

Albert has two multi-homerun games, and Tuesday was his fifth game this season with at least one to total him at seven on the season.

Power is nice and all, but the real story here is consistency which is what Parks, another junior  college transfer, represents.

Parks notched five RBIs against Robert Morris, and it speaks volumes to how consistent he has been in the batting order as of late.

He was already coming off an impressive week in which he batted .500 from the plate, but this performance goes to show how much the lineup needs him.

This team performance as a whole was just what Eastern needed as it sits with 19 losses on the season.

It is important to note just how young the Panthers are and were a year ago, whereas now they at least have some elder leadership because of these transfers.

While the Panthers continue to be led by regulars such as Joe Duncan, Jimmy Govern, and several others, it is a positive sign to see new additions make a difference.

This improvement as a team from the plate has resulted in the team scoring seven or more runs in four straight games.

Now Eastern searches for that complete game as the pitching staff also tries to continue improving.

All parts of the team will be able to try and keep momentum going as it is a quick turnaround to Wednesday’s matchup against Southern Illinois.

Eastern takes on a Southern Illinois squad which comes into the game with a 12-12 record this season.

The Salukis send a left-handed freshman to the mound against Eastern, while the Panthers have not announced their starter yet.

The southpaw Brad Harrison comes into face the Panthers with an 0-2 record and 5.27 ERA in 11 appearances this season.

Regardless of who Eastern sends to the mound in this one, it will be important for them to go deep into the ballgame.

The Panthers used four pitchers against Robert Morris, but the starter, Brendon Allen, made it just two innings.

It is worth noting Eastern has used a strategy like this often throughout the season such as games against Alabama and Murray State.

Whether it works or not will be decided with first pitch at 3 p.m. in Coaches Stadium as the Panthers close out this five-game home stand.