Loss at home has positives for tennis team 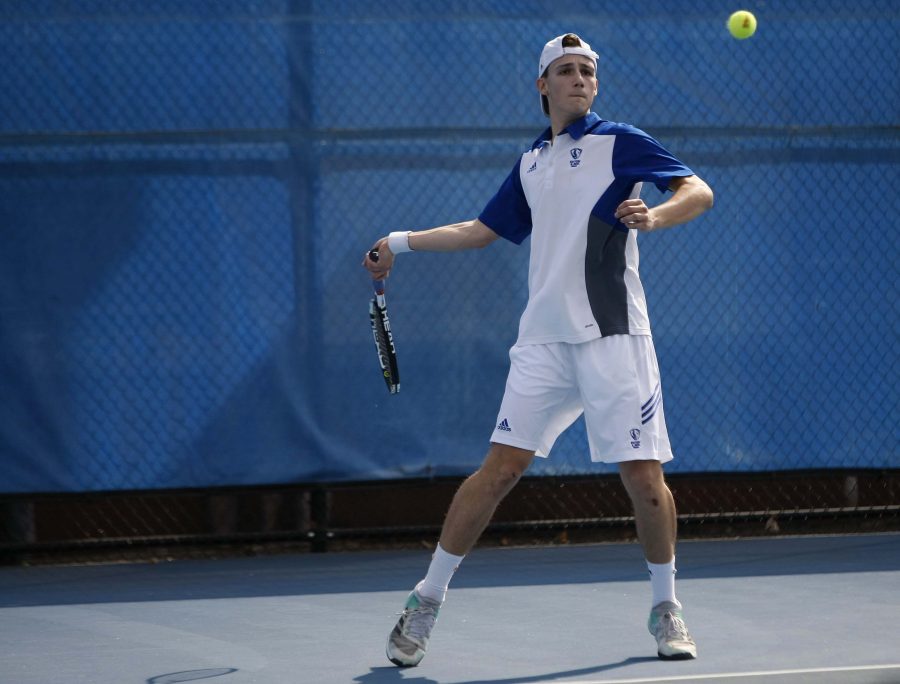 The first home match for Eastern this season ended in a 7-0 loss for the Panthers, but there were some positives the team took from the match.

The loss to the Eastern Kentucky Colonels marks Eastern’s ninth time this season they have been swept 7-0 by an opponent.

Kercheval has stressed how important the doubles portion of the team’s matches are in the past.

He said the team has started to play smarter, adding that the team is starting to see that the simple things they talk about are starting to work.

On the singles side, Kercheval said the team did well, but it hurts when some of the matches end quickly because it “lets the air go out.”

“We’ll continue to build on it, and it’s still a process,” Kercheval said.  “We took a good step today.”

The competition started with the doubles matches first.
The duo of freshman Gage Kingsmith and junior Grant Reiman lost 6-3 after taking an early 2-1 lead.  The two had great serves and returns early in the match, but some mistakes in bigger spots in the match cost them the victory.

Kercheval said this was the trend the team had in their doubles matches.

“We told them after the doubles, for everyone, we played 80-90 percent of the points well and smart,” Kercheval said.  “Ten-20 percent of those points though we didn’t quite do what we should have.”

Both were down 4-3 later in the matches, but Woodson and Wendell lost 6-3 after fighting to get within that one point.

Reiman and Ammer tied their match 6-6 after coming back with some battling, but lost the tiebreaker, losing 7-6.

He also said Reiman and Ammer played well, but a double fault and a missed second ball hurt them and they lost.

Eastern continued its tough play into the singles portion of the contest.

Both Reiman twins lost the first set of their singles matches by at least four points, but both also made a late push in the second sets to go to a third set.  The twins both lost in two sets: Grant lost 6-2, 7-6, and Trent lost 6-1, 7-5.

Woodson came the closest to winning his singles match, being a “perfect example of doing whatever it takes to be in the match” according to Kercheval.

Woodson faced Eastern Kentucky’s Jan Kuehling, who was named the OVC’s Male Tennis Player of the Week.  After doing everything he could, Woodson lost to Kuehling 7-5, 7-5.

Eastern Kentucky improved to 12-5 with the win, and Eastern’s home record dropped to 2-1.

Eastern now has a 3-16 overall record, and the team has two more OVC matches this weekend, first against Belmont Friday, then Tennessee State Saturday.