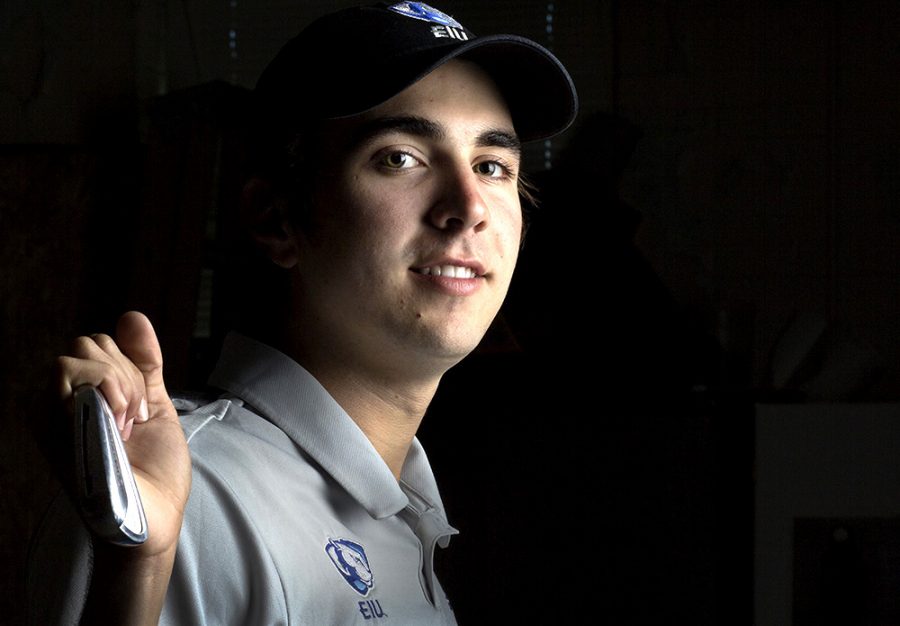 Sophomore Alvaro Hernandez began the spring season with a top-10 finish at the Butler Florida Invitational March 8 and 9 in Jacksonville, Fla.

Sophomore Alvaro Hernandez has emerged as the top golfer for the Eastern men’s team in his short time with the program.

Despite having the most rounds of all golfers on the team, he still owns the lowest average per round with 73.47. Hernandez is the only player to have a top-five finish this season and has a team high two top 10 finishes.

Hernandez has been playing golf for 14 years and he grew up in Islas Canarias, Spain.

“My dad used to organize golf tournaments so when I was bored I would just go with him to the golf course and I just started on the range hitting balls and that is how I got into it,” Hernandez said.

Hernandez is used to working very hard to get to where he needs to be thanks to his father although jokingly admitting that his father is not the best golfer.

“He introduced me to golf and I am so thankful for him to bring me to the world of golf,” Hernandez said. “He pushed me day after day to practice and just to keep practicing because I now want to get to the professional golf world so I need to work very hard. Thanks to my dad I think I have that.”

Due to the lack of interest in golf where he grew up, Hernandez had to learn mainly by himself and by participating in national tournaments.

“I live back in Spain on an island where not many people play golf,” Hernandez said. “There are many people that will play golf, but just as a hobby and do not want to take it seriously. It was really tough because I had to practice a lot of the time by myself and I had no clubs or anything so I had to go to the mainland to Barcelona or Madrid and bigger cities to play national tournaments.”

“Freshman year it was a rough year because it was the first time living by myself in another country,” Hernandez said. “I had to adjust to the culture here and the habits that I used to have that I could no longer have now that I am here.”

It did not take long for Hernandez to finish as Eastern’s top golfer in his freshman year as he reached that mark in just his second career tournament. He shot a three-round total of 225 to finish tied for 27th in the Murray State Invite.

Hernandez finished as the leader for Eastern in all, but the first tournament of his freshman year season including the fall and the spring. In the Ohio Valley Conference championship, he finished tied for 35th. He had the two lowest rounds of the tournament for Eastern to finish with a total of 230.

Hernandez is most confident when he has his driver in his hands, but would love to be more comfortable when using his putter.

Hernandez has played with the national team of Spain a few times and has made big achievements back at home.

“When I was back at home I finished third in a National Championship,” Hernandez said. “I was under sixteen and that was probably my biggest achievement. I also won the second division of my state, it was a national tournament and we won it with a team.”

Hernandez just recently competed against a friend from Texas Rio Grande Valley who is from the same hometown in Spain as his mother. He said it was pretty neat to get to see his friend Casto Gomez-Ruiz and play in the same tournament

“I actually have a lot of friends that have come from Spain to here in the U.S to play golf from all over the country,” Hernandez said. “I have friends in California, Florida and around here in Iowa too.”

Hernandez has continued to be the leader in his sophomore season as he has been the top finisher in all four of the fall tournaments and the first two tournaments of the spring.

Hernandez said his favorite course that he has golfed in his career at Eastern was at the Zach Johnson Invitational. This happens to be the place where he recorded his highest finish as a Panther. He tied for fourth with a three-round total of 224 and it helped the team reach its highest finish in two years.

Weather conditions such as rain and wind can have a major impact on a golfer’s performance. Hernandez had to face the challenge of coming from steady nice weather in Spain to the unpredictable weather of the Midwest.

“Back at home it is windy so I am kind of used to playing with the wind and sometimes it’s tough and sometimes it’s fun,” Hernandez said. “The better you play, the more fun you have, but also where I live it is very warm so every time it rains or gets very cold I will struggle with it, but I will get used to it.”

Hernandez plans on continuing his golfing career after he graduates.

“My plan is to graduate and after that I will probably move back home again. I will practice for a year or two, play more golf and try to into the professionals and try to get into a smaller professional tour,” Hernandez said. “From there I will just try to climb by way up to the top.”