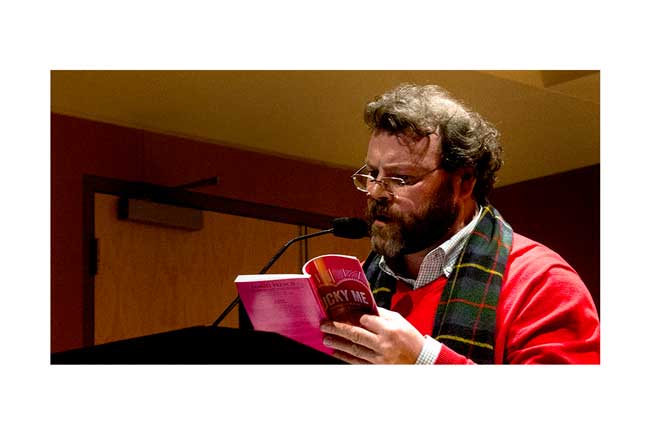 Robert Caisley, Head of Dramatic Writing at the University of Idaho, recites some verses from his most recent play, “Lucky Me”, in the Doudna Lecture Hall. Caisley lectures on the specialized, time consuming process of writing plays from the point of view of the director, and the pitfalls and rewards associated with live theater.

Playwright and alumnus Robert Caisley returned to Eastern to talk about his craft and the writing process Wednesday evening.

The 1990 theatre arts graduate held a workshop and discussion titled “In a Dark Room, with Strangers.”

The discussion focused on the differences between writing for plays and writing for fiction.

Its title was inspired by Caisley’s experience watching the audience react in real time to his work, something he said novelists rarely have the opportunity to do.

“It’s thrilling and it’s incredibly unnerving,” he said, blaming his receding hairline on this tension.
Caisley said the most rewarding audience reactions are laughter and pin-drop silence, when the crowd is highly engaged in his work.

“It pays such high dividends,” he said.

Caisley said novels rely less on dialogue than plays, as a playwright’s voice can only come from the spoken word and not narratives.

“In the theatre, it has to be intensely stylistic,” Caisley said.

He therefore frowns upon actors trying to “naturalize” their lines by taking on more conversational tones, though he acknowledges that they do so to relate more with their roles.

“The actors are not your characters,” Caisley said.

“In a Dark Room, with Strangers” touched on other topics, including Caisley’s personal writing process.

The comedy playwright said he tends to write in plot points without knowing where they will lead. He provided an example from his play “Happy.”

He wrote a soaking man into the plot before he decided what to do with the concept.

“I like to write from the position of not knowing,” Caisley said. “I started asking questions that the actors would ask; ‘Why is he wet?’”

To add suspense, Caisley said he likes to leave such questions unanswered for as long as he can.

Caisley said rhythm is a major factor in writing a successful comedy, as he demonstrated with the back-and-forth banter of the characters in his play “Lucky Me.”

This play has been translated into Italian and French and is now touring Estonia as “Today Begins New Life.”

Caisley also discussed what rights others have when using his scripts. He said directors cannot change a single word without his permission, but he usually grants requests.

The most notable exception, he said, was that of a school production of “Front,” in which a young woman considers getting an abortion during the London Blitz.

Caisley said the school wanted to remove all mentions of the abortion from the play, but he denied them permission because it was illogical for the character to remain pregnant during the bombings.

“They wanted to cut a scene of abortion in a play about war,” Caisley said. “It’s mind-boggling to me.”

Caisley said his father, who has been acting in plays for decades, was a major influence in his decision to get involved in theatre. Some of Caisley’s earliest reading materials were his father’s scripts, littered with notes such as “exit R,” or exit right, “BO,” or “blackout” and “drink whiskey.”

“It was seeing (the notes) that made me want to write plays more than anything else,” Caisley said.

Caisley said his inspiration for specializing in comedy plays came from growing up with two competitive brothers. The three bickered frequently, but Caisley found he could usually win by cracking a joke instead of arguing.

Kevin Doolen, the chair of the theatre arts department, said they bring professionals such as Caisley to Eastern to give students learning opportunities.