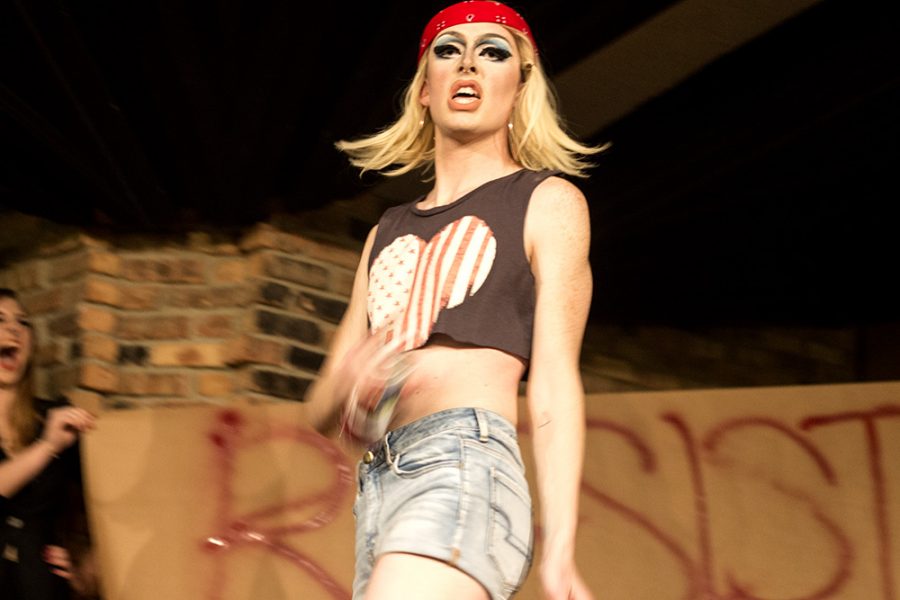 Lady Save the Bees models in front of her Resist poster, in which she spray painted as part of The Diva Drag Show.

EDIT: The story has been corrected with the student’s accurate stage name of Madame Succub—. The Daily Eastern News regrets the error.

Lady Save the Bees trumped the crowd Tuesday night in the 7th Street Underground with her anti-Trump performance to resist misogyny, homophobia, racism, transphobia and bigotry.

Alex Woolley, a sophomore studio art major, took on the persona of Lady Save the Bees for the first annual Student Drag Show hosted by EIU Pride.

She wore a denim jacket adorned with “F— Trump” on the reverse side, then spray-painted “RESIST” on a paper scroll behind her.

The show was in preparation for the DIVA Drag Show at 7 p.m. Thursday in the Martin Luther King Jr. University Union Grand Ballroom.

All proceeds from both shows will be donated to Sexual Assault Counseling and Information Service.

The show consisted of two categories, which were runway and lip-syncing.

In between categories, the audience members had the opportunity to strut on the runway as the queens prepared backstage for their next performances.

Drag shows are an accumulation of performing arts, music, theater and visual arts, Lady Save the Bees said.

In preparation, she said she practiced applying her makeup for nearly two months.

Lady Save the Bees said it was her first time performing in drag, and she had never lip-synced in front of an audience while dancing, nor had she worn full drag garb.

She hopes to continue doing shows in the future and said she would love to perform at Chester Street Bar in Champaign.

“I am very concept driven. Concepts come to me first, then visual parts comes later,” she said.

One of Lady Save the Bees’ outfits and performances made a political statement. She performed to an anti-Trump song and got a strong, positive response from the audience.

Another outfit was a black mourning dress with beads, and she carried a bouquet. She said she pulled inspiration from “The Addams Family” for this look.

A performance by Vander Von Odd had a similar, murderous song, she said.

“It would be sickening” to recreate the concept from Vander Von Odd with her own ideas, Lady Save the Bees said.

Lady Save The Bees, Danny Long Legs, Madame Succub—- and Plain Jane Lane Berglain were the four winners and will open for the DIVA Drag Show Thursday.

Volunteers who want to help set up for the DIVA Drag Show can do so for two hours to receive $5 off of their entry.