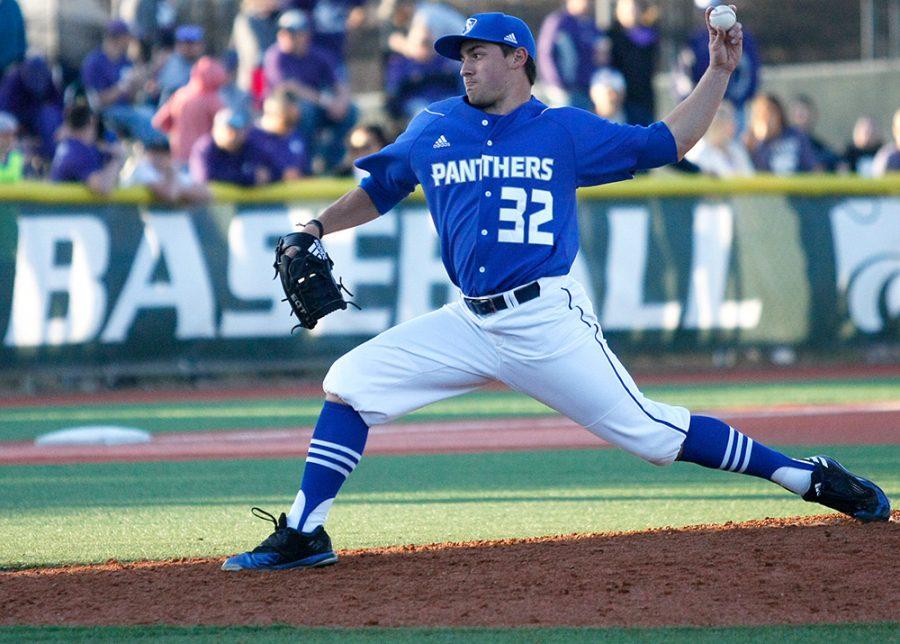 The Eastern baseball team finally got the performance it wanted from its pitching staff, but it still was not enough.

The Panthers traveled to Indiana State Tuesday afternoon for the first of a home-and-home series between the two this season.

It was Eastern’s final road matchup, which concludes a lengthy 19-game trip to start the season, but the 2-1 loss was one of the toughest yet.

The Panthers had their senior on the mound in Brendon Allen and he struggled in the first inning,  giving up one early run.

But Allen would find himself, in fact, he put together his best outing all season, as he gave up just one run on five hits in seven innings pitched.

Eastern finally got a starter to go deep into a ballgame, but the bats just went cold against the Sycamores by not being able to score until the final inning.

After a strong relief performance from Alex Stevenson in the bottom of the eighth, the Panthers were able to strike a run in the top of the ninth and tie the game at one.

But as many Eastern fans have seen before, the Panthers faltered late when it mattered most.

A walk and a hit-by-pitch allowed the Sycamores to have runners in scoring position where a sac-fly was all that would be needed for the game-winning run to cross the plate.

The (2-17) Panthers suffered their third straight loss but finally get the chance to return home this weekend to continue conference play.

The loss hurts their record but the game showed a continuance of improvement from a young Eastern team.

This is the second consecutive game in which the Panthers have fallen in late innings, and it is clear the bats just struggled.

Against Jacksonville State, it was Eastern’s offense which kept them in the game whereas this time around that was not the case.

Hits came at a premium with just five in the game, and it led to the Panthers leaving six runners on base.

Despite the loss, Joe Duncan added another multi-hit game to his resume for the season, as he led the team with two against Indiana State.

Duncan continues to lead the team in batting average as well, as his stands at .316 following the performance against the Sycamores.

Nicholas McCormick has also continued to produce at the plate as he heads into the weekend with a .269 average at the plate.

The Panthers still have a few chances to improve their non-conference record later on in the season, but now turn their focus temporarily to conference play.

After the three-game home series against Murray State this weekend, Eastern welcomes Robert Morris into town next Tuesday for another single-game matchup.

It will be part of a five-game home stand for the Panthers.