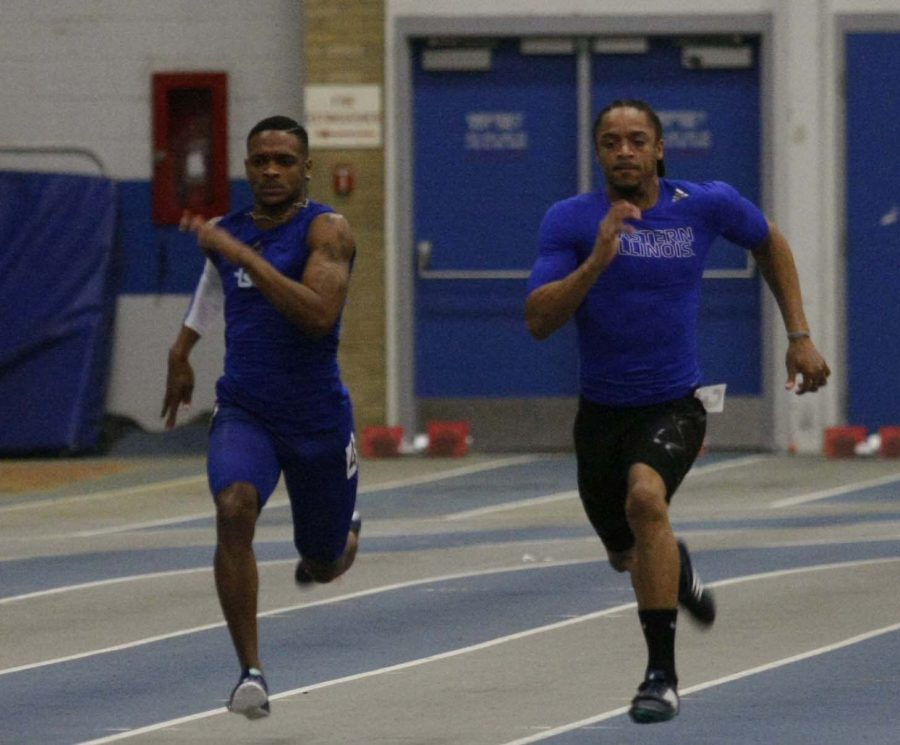 Senior Jonathan Boey takes off in his prelim of the 60 yard dash. Boey would go on to win the finals in the event leading the EIU Men’s team finishing 1st, 2nd, 3rd, and 6th. When asked about the race Boey said “It’s simple slow feet don’t eat. We live by that on this team.”

The track and field team is transitioning to the outdoor season after sweeping the men’s and women’s Ohio Valley Conference Indoor Championship titles last month.

While the Panthers just missed sending individuals to the NCAA Indoor Championship, two athletes ranked within the top 25 for their respective events. Junior Haleigh Knapp was ranked 20th in the country for high jump, and junior Davion McManis was tied for 24th in the long jump.

One main difference between the indoor and outdoor seasons is the addition of new events that are dedicated only to the outdoor season. The javelin throw, discus, hammer throw, steeplechase, 1,500-meter run and 110-meter hurdles will all be held during the season.

Senior Greg Rogers said another difference is the miles ran per week during practices.

“Right now, we are pushing the mileage of our strength,” Rogers said.

Rogers said the athletes typically compete at fewer meets because of the team’s emphasis on strength training.

The Panthers open their outdoor season at Southern Illinois University-Carbondale on March 25. There is one home meet at the end of March compared to the three regular season home meets held in the indoor season.

Both the men and women saw success at the OVC Outdoor Championship in the 2016 season. The women earned their first outdoor championship title since 2013, and the men ended up in second place behind Southeast Missouri.

Senior Riley McInerney also made appearance in the regional. He posted a time of 9 minutes, 12.73 seconds in the steeplechase, earning him 22nd place in the second heat.

Eastern also had a solid showing at the outdoor season opener in Carbondale last season and will look to regain similar successes at the 2017 season kickoff.