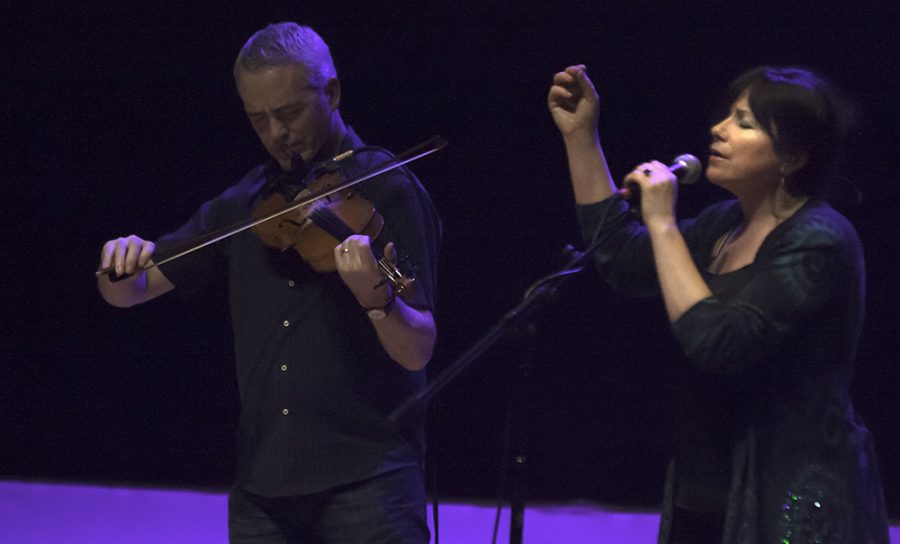 Tom Morrow and Cathy Jordan of Dervish, a traditional / folk group from Ireland, perform a ballad at the Doudna Fine Arts Center Wednesday. Dervish successfully engaged its audience — a majority were clapping along with the traditional Irish music just before the intermission.

The group performed in the Dvorak Concert Hall of the Doudna Fine Arts Center.

Dervish has shared the stage with artists such as James Brown, Oasis, Sting, Beck and R.E.M.

This dynamic group is internationally renowned and has received numerous rewards for their superb renditions of traditional Irish folk tunes.

Mitchell showed his astounding ability to create magnificent music from his accordion, especially in the rowdy ending to the first half of the show with “The Thrush and the Storm.”

Holmes then accompanied him on the bouzouki, a Greek stringed instrument similar to the guitar.

After the driving duet, McDonagh vigorously joined in, creating energetic rhythm and harmonies within the trio.

The three members played an explosive crescendo that brought in the rest of the group, with Kelly on flute, Morrow on Fiddle and Jordan on a traditional Irish drum called the bodhran.

The energetic, driving rhythm caused the audience to instantly begin clapping with the beat.

Each piece was eloquently introduced by the charismatic Jordan. Her delightful Irish brogue and witty dialogue immediately won the audience over. Jordan was able to elicit laughter from all audience members and even convinced the majority of them to sing along on various choruses. She had the amazing ability to educate the attendees while simultaneously entertaining them.

Never once did audience members tire of her words as she easily explained the origin of each song.

She also stated that Eastern has a lovely campus and that she would like very much to return someday.

Not every piece utilized vocals, yet each one was able to convey a message.

Kelly introduced two songs: “The Sheep and the Boat” and “The Rolling Wave.” He described a sad story of a boat being capsized in the sea, causing many lives to be lost. As the group somberly played, the audience was overwhelmed with a sense of melancholy. With no words, the group was able to convey the story of a stormy night and its inevitable conclusion.

However, the mood was seamlessly changed as they transitioned into the second piece, transporting the audience to the feeling of rolling waves on the sea.

The beginning of the second half of the show created so much energy that the audience began clapping to the infectious rhythm once again. “The Corner House” allowed the band to display their incredible dexterity. Watching the group’s fingers fly across their instruments instilled wonderment within the audience. The amazing talent and connection to each song instilled a sense of awe.

After the final piece, the band returned to the stage for an encore. It’s difficult to believe how a group could continue to build energy, especially after two hours of performing. The incessant drive of the rhythm, the beautiful flow of melodies and the dulcet harmonies stirred the audience to a standing ovation.

Dervish is only one of many groups to perform in Charleston. Previously, Gangstagrass, a hip-hop / bluegrass fusion band, performed in Doudna.

Unfortunately I missed this show, but I overheard many conversations afterwards causing me to regret missing an excellent performance. An upcoming event not to miss will be a Piano Battle with professional musicians Paul Cibis and Andreas Kern. These two performers will not only perform classical pieces, but will be judged upon different styles to improvise. Who gets to decide and judge the two? You do! The audience gets to choose which style they perform and the winner.

To find out more about these shows, those interested can go to the Doudna Fine Arts Center and ask.

There are plenty of pamphlets with upcoming events, and there is always a helpful art, theatre or music major who could give you information. Do you cut through the Doudna between classes? Grab a brochure, and come to performances.