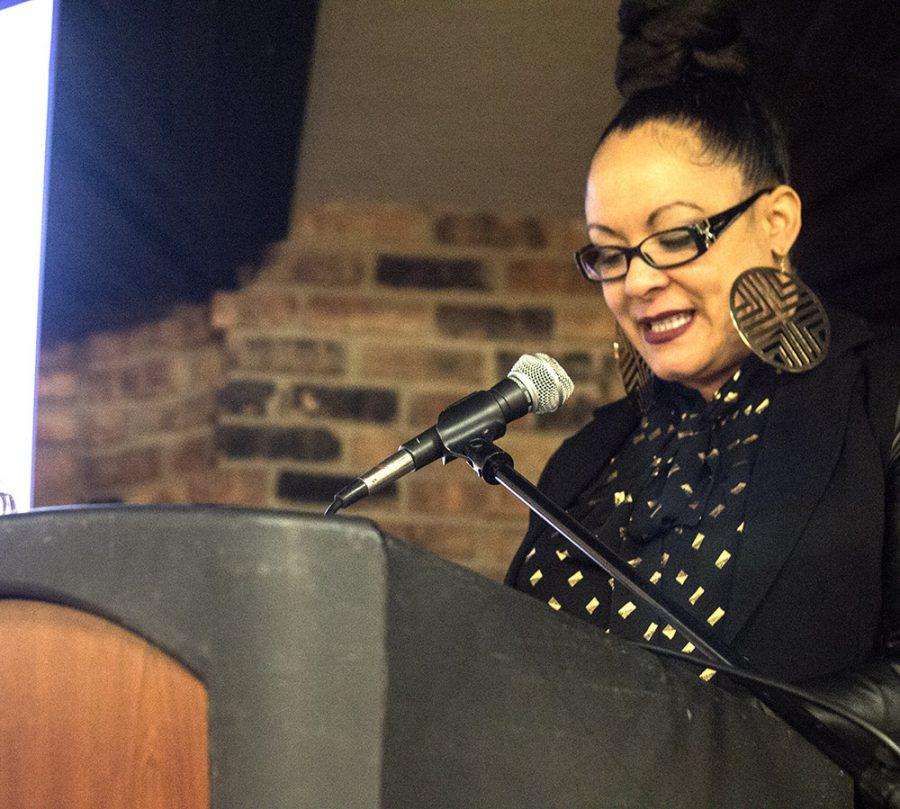 Carmen Kynard, a professor at John Kay College in New York discusses women, and race and how they’re presented in society.

The keynote speech for Women’s History and Awareness Month focused on historical transformations black students have made in higher education and connected past social issues to issues of today.

Carmen Kynard, an English professor from the John J. College of Criminal Justice at the City University of New York, traveled to Eastern’s campus Tuesday evening at the 7th Street Underground.

In the 1920s, black students were surrounded by a culture of creativity and musical freedom, yet could not participate in it at college, Kynard said.

The nearly all-white faculties in charge of the schools taught manual-labor skills, gave students strict dress codes and demanded they all look likes slaves, she said.

“Before I’m a slave, I’ll be buried in my grave,” black students sang in protest against oppression. The chant was adopted and used by protesters during the Civil Rights Movement of the 1960s.

Kynard said the top selective universities in the country are “whiter” than they were in the 1920s.

She said black women particularly struggle when it comes to the “hierarchy of body politics.” Those people at the top of this hierarchy have lighter skin and smoother hair, she said.

She calls this a “color caste system” and has talked about it in her classes for the past 16 years. The conversation is usually initiated by a young, black woman, Kynard said, and these young women point out the hierarchical system of racial differences.

A student named Andrene in Kynard’s class in 2014 made a website called “Pretty for a Black Girl.” On her website, Andrene challenged ongoing white standards of beauty, Kynard said, and “re-scripted the stigma” around black women.

One of the tabs on Andrene’s website is named after a phrase Oprah called, “Burning through the Cerebral Cortex,” she said, which refers to black women’s oppressive relationship with straightening their hair.

She said her student’s site anticipated critique and feedback from individuals with different opinions than her.

Andrene’s website led Kynard to say she looks closely and differently at each students’ writing styles and texts.

She wants to try and match their force and vision, she said.

Kynard said, “There are different ways of knowing and writing (about) the world.”

WHAM committee chair Jamila Smith said, Kynard will meet with staff at 4:30 p.m. Wednesday in Doudna room 2040 to make what she taught Tuesday applicable to professors and students.