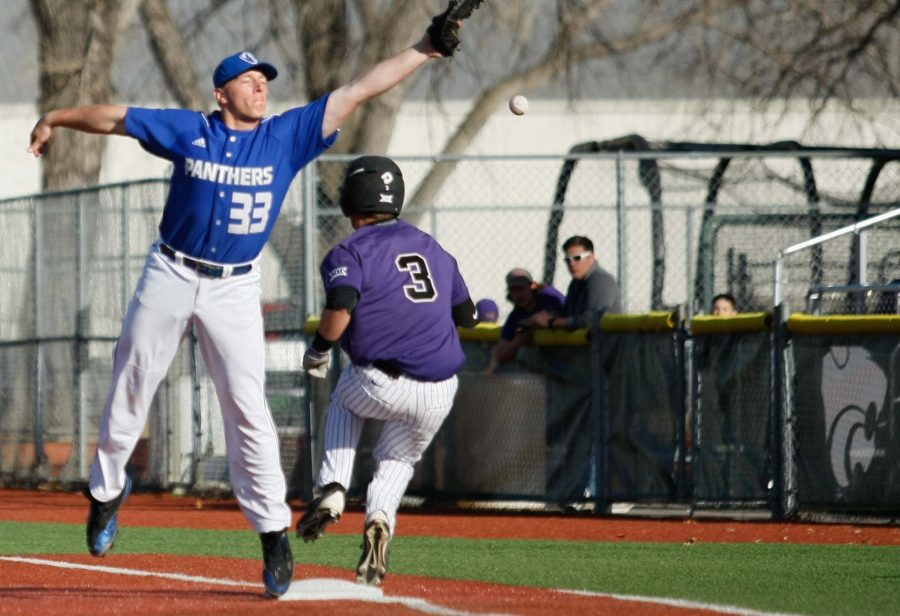 An errant throw gets past junior Matt Albert in the fourth inning of Saturday’s 12-11 loss to Kansas State. Five Panther errors proved costly in the walk-off loss at Tointon Family Stadium in Manhattan, Kan.

When the Eastern baseball team faced a high ranking SEC opponent a year ago they pulled off a shocking upset win, and now they try to do the same.

It comes in the midst of what has been an extremely tough schedule for the Panthers.

The search begins with a pitching staff that Eastern coach Jason Anderson said is full of talent but just needs to build confidence.
Confidence comes with the ability to throw strikes consistently and that is what led Anderson to deciding on his starting pitcher for tomorrow’s matchup against Missouri.

Junior, left-handed pitcher Logan Beaman will be the man on the mound to get things going for Eastern.

He has not seen a lot of action, just yet, as he has pitched just 4.1 innings this season while boasting a 8.31 ERA in those appearances.

“Our pitching staff is struggling to throw strikes right now, and he’s a guy who can go out there and do that consistently,” Anderson said. “I’m confident in his ability to go out there and compete against them.”

As far as numbers go, the Panthers have a decent matchup ahead with the pitcher set to face them tomorrow.

Bryce Montes De Oca will be the starter for Mizzou and comes in with a 13.50 ERA, but it also most be noted that he has faced some elite competition as well.

But it is also important to realize that the Panthers have faced their own fair share of elite competition and their 1-9 record has suffered from it.

“It’s no secret that this road schedule is pretty tough, but we did go into Arkansas last year and get a win so it can be done,” Anderson said.

As far as what it takes to defeat a solidified opponent such as Missouri, Anderson said it is all about taking it one out at a time.

The Panthers pitching staff has struggled this season and a large part of the concern is early runs given up due to walks.

“My message to them is were not expecting each pitcher to go nine innings; it just has to be taken one out at a time and one game at a time,” Anderson said.

The bullpen has been shaky to begin this season with the elite competition it has faced, but a few guys have still impressed.

Jake Haberer has bounced back from somewhat of an inconsistent season by leading the entire pitching staff with an ERA of 1.93.

Chase Thurston has also continued to improve and his most recent outing against Kansas State resulted in a scoreless inning on the mound.

The Panthers could use some help from their bats after a weekend that offered a rollercoaster of momentum.

Eastern put up more than 20 runs this past weekend yet had nothing to show for it in a sweeping loss.

“Our guys are starting to put the bat on the ball and are consistently hitting the fastball” Anderson said. “We just have to build momentum off that now even though some of it was taken away after running into a really tough pitcher Sunday.”

That momentum will also be needed as the Tigers are just rolling right now heading into the matchup against Eastern.

Missouri has won 10 straight games after dropping their season opener to Eastern Michigan, and they are ranked 26th for good reason.

Joe Duncan and the rest of the Panthers lineup is dealt the task of matching the Tigers team in hopes of pulling out the upset win.

The wind blowing out against Kansas State also offered the opportunity for Duncan and others to put the ball over the fence and gain some confidence at the plate.

Overall though, the Panthers have three guys batting over .300 on the young season, and Duncan and Frankie Perrone are tied for the team league in home runs with two.

Both guys get a shot to add to that Tuesday at 4 p.m., and the team will follow this midweek mathchup with a three-game weekend series against Samford.