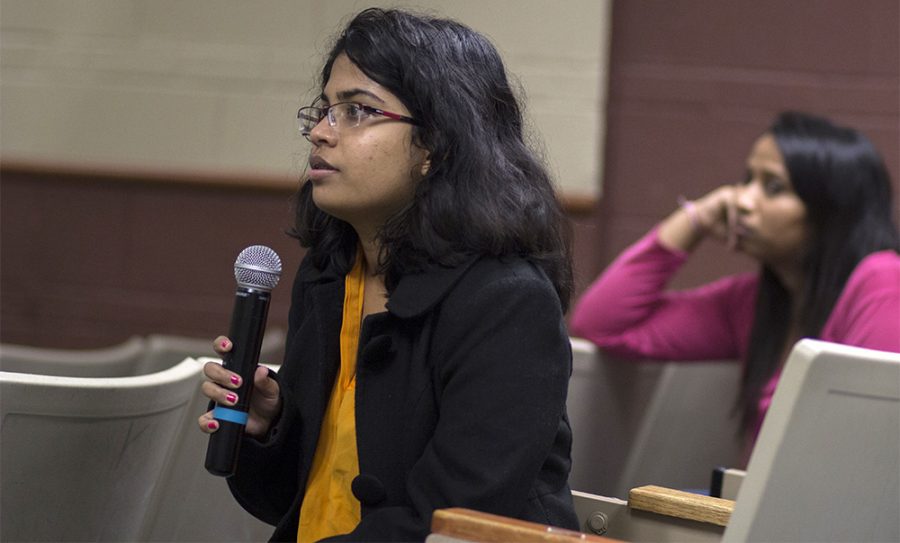 Hashni Vidana, a biological sciences graduate student asked asks a question of President Glassman during Monday night’s “Dr. G. You and Me” student forum in Buzzard Auditorium. Vidana suggested a mentoring program for all new students. She said while obtaining her Bachelor’s in England her mentor was very beneficial with basic things such as finding a grocery store and said all new students could benefit from a similar program.

Hashni Vidana, an international graduate student studying biological sciences, said while getting her bachelor’s degree in England, she noticed a mentoring program she believed would be beneficial for Eastern to duplicate.

“We need a mentoring system at this university, so when new students come to the university there is a student you can meet and talk with,” Vidana said. “I know it’s here at the university, but they leave after the first week of orientation and don’t keep in touch.”

Vidana said having a longer mentoring system would help students feel more at home and even help them figure out little things like the best places to eat and shop.

Adam Sandoval, an orientation leader and president of the Latin American Student Organization, said many minority students he helps at orientation and follows up with throughout the year are not connecting with the campus because there is nothing at the university to make them feel at home.

“I think we should have something at Eastern that could be for those students who don’t feel at home, because it’s a culture shock,” Sandoval said. “We do have a Cultural Center here, but it also would be nice to go the Cultural Center and not be locked out. It’s not open all the time.”

Sandoval said getting into the Cultural Center is difficult because he has to communicate with people to get a key. However, he said he can rarely get ahold of anyone so he often has to call the University Police Department just to get inside.

“The building is not in the best condition either,” Sandoval said. “So we can’t really utilize all the resources it has to offer.”

Glassman said he sympathizes with the students, but at the same time wants to create an activity for all students to enjoy.

“It’s my interest to not only make everybody comfortable, but to have everybody interact with each other,” Glassman said. “We live in a very globalized world and we all need to share and respect and understand each other.”

Kayla Young, a sophomore communication disorders and sciences major, said the Downtown Square in Charleston is a cute area, but it does not have many shops that appeal to students.

Overall, Glassman said the main goal of the forum was to see what students had to say since their influence through talking to people and using social media is more effective at recruiting students than anything else.

“If you can make a great student experience for your students, you get paid back more and more each time,” Glassman said. “(Students) are the best recruiters of any university. Admission officers, they’re good, but at the same time they’re biased and they’re being paid to do it.”