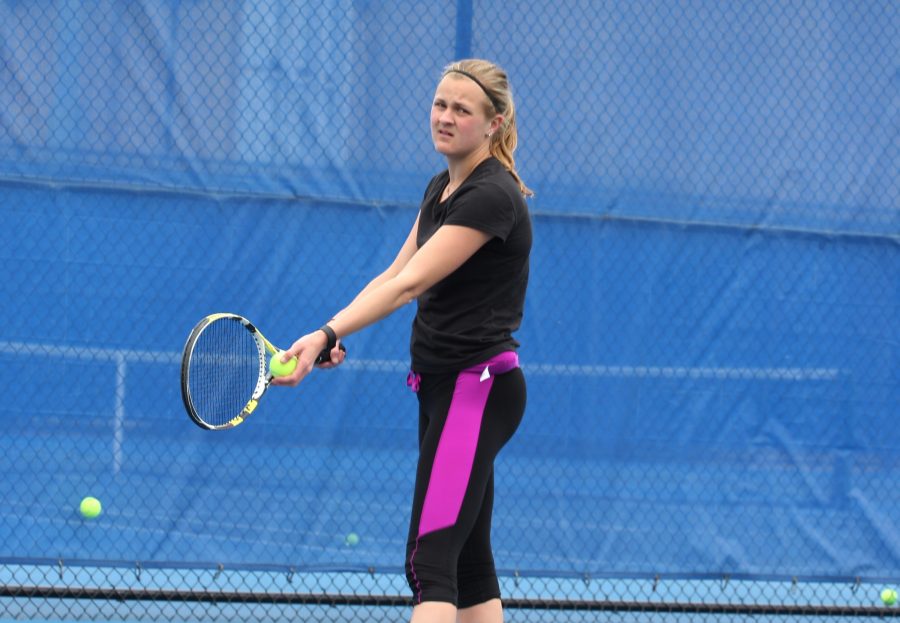 Senior Kelly Iden prepares to serve the ball in practice in the spring of 2016. Iden continued to find success in the No. 1 spot after defeating her opponent in singles and also winning in her doubles match.

The Panthers saw a weekend of ups and downs against Chicago teams.

The Eastern women’s tennis team started their weekend against a slate of Chicago opponents off right this weekend, although the ending could have been better for the Panthers.

Saturday was a strong showing from the Panthers against Chicago State. Even with junior Grace Summers out, the Panthers did not miss a beat, winning by a score of 6-1.

This weekend’s matches were the first time this season Summers did not see game action. With her out, a bit of rotational change took place.

Freshman Emily Pugachevsky is another Eastern freshman off to a strong start to spring play. Pugachevsky defeated freshman Judit Aubets (6-2, 7-5).

In doubles play, Cliffe and Iden started things off right. The freshman/senior duo defeated Pangestu and Gadacz (6-2). The Panthers statistical strongest duo was up next, Pugachevsky and Slaria defeated Lloyd and Gamboa (6-4).

Senior duo Moshteva and Stadalninkaite finished doubles play. The two were defeated by Kostyuk and Aubets (6-3), although the Panther point had already been won.

Sunday against Depaul was a different story. The Panthers ran out of steam against the Blue Demons, as they were defeated 6-1.

The Panthers did avoid a sweep though. Cliffe notched her 10th win of the season Sunday. The freshman defeated junior Patricia Lancranjan (6-3, 6-4). With that win, Cliffe is the first Panther to reach double digits this season, with a record of 10-1.

“Stella was already a very talented player coming to EIU, but she has made many improvements to her game, especially in doubles. Stella is and will continue to be an asset to our team,” coach Emily Wang said.

The Panthers continue their season this Sunday, with a rare one meet weekend. They will travel to Des Moines, Iowa to take on Drake Sunday. The first matches get an early start, as play is set to begin at 11 a.m.