Volunteers ‘plunge’ for the Special Olympics 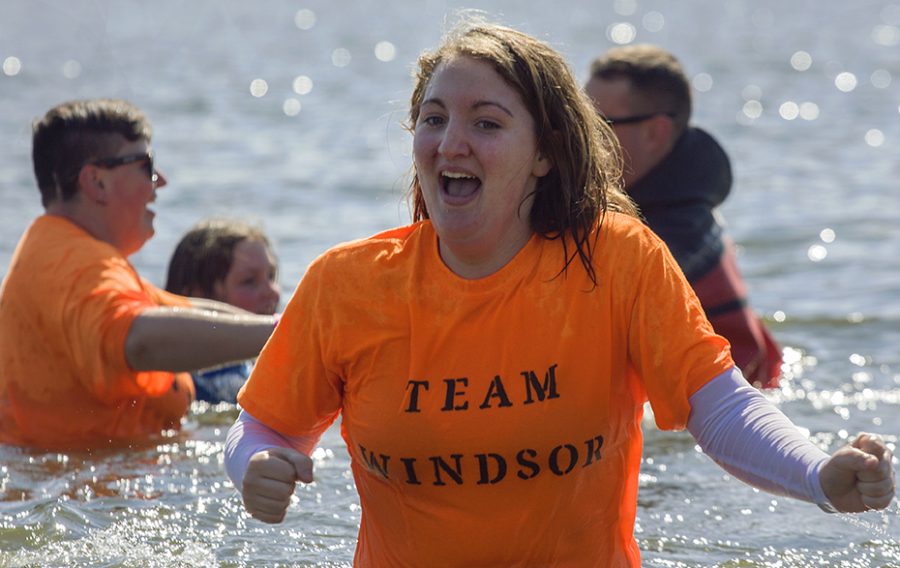 Haylee Reynolds, a freshman at Windsor High School, reacts to the cool air as she jogs out of the water during the Polar Plunge Saturday at Lake Sarah in Effingham. Reynolds said she participated because her gradmother is the Special Olympics (the event’s cause) coach in Windsor.

EParticipants made a splash- and a difference- as they braved the waters of Lake Sara in Effingham for the Law Enforcement Torch Run Polar Plunge on Saturday.

Alongside the beach, people cheered on family and friends as they made their way into the lake and quickly ran out to change out of their wet clothes.

Some plungers chose to dive into the water, coming up to gasps and cheers from spectators.

Lisa Todd, a family ambassador with the Special Olympics, was not plunging herself, but said she is there every year to support her son, Bradlee Todd.

Sullivan resident Bradlee Todd was participating in the plunge for his third time and is also an athlete in the Special Olympics, competing in basketball, softball, track and field, swimming, bowling and flag football.

“It’s a fun thing, meeting new people, you get a chance to meet people from around the world,” Bradlee Todd said. “It’s fun being an athlete.”

Lisa Todd said she has seen athletes who participate in the Special Olympics gain greater confidence, hope and independence.

“They become a family,” she said. “…We really care about the kids we take care of. They’re not just athletes to us, they’re a living part of us. You almost can’t put in words what the Special Olympics does for so many children.”

This year’s plunge was especially exciting for Bradlee Todd, as he was the captain of the  “Alpha-Bears” plunging team.

“It’s really fun to plunge for my fellow athletes and have all of these people from around the area come here and plunge with us and just have fun,” Bradlee Todd said.

Along with supporting the cause, Lisa Todd said, plungers also get to have fun and express themselves through costumes.

“They get to dress up in weird costumes, and jump in the water and they get to associate with like-minded people,” Lisa Todd said. “If I want to be crazy and I want to dress up like a zombie or like a princess, I can and still raise money for a great cause. It’s a wonderful opportunity for people to get out, support a cause and just be happy.”

He said plunging with the special education department was a great way to get to know others in the program.

“We come together and really have that family aspect,” Mata said.

Participants were required to collect at least $100 in donations to plunge into the water.

Jen Mazurkiewicz, a senior special education major, raised $330 with the help of friends, family and through spreading the word on Facebook.

Saturday was her first time plunging.

“It was definitely an experience,” she said.

Though she was initially nervous, Mazurkiewicz said actually going in the water was interesting.

“It wasn’t actually as bad as you’d think it would be, it was a little cold,” she said. “My feet were cold, but it wasn’t as bad as I expected it would be.”

Mazurkiewicz’s advice for those who are hesitant to get in the water?

“Know it’s all going to a great cause, supporting these amazing athletes,” she said. “Knowing that I can help them with the games and help them prepare for it is amazing.”