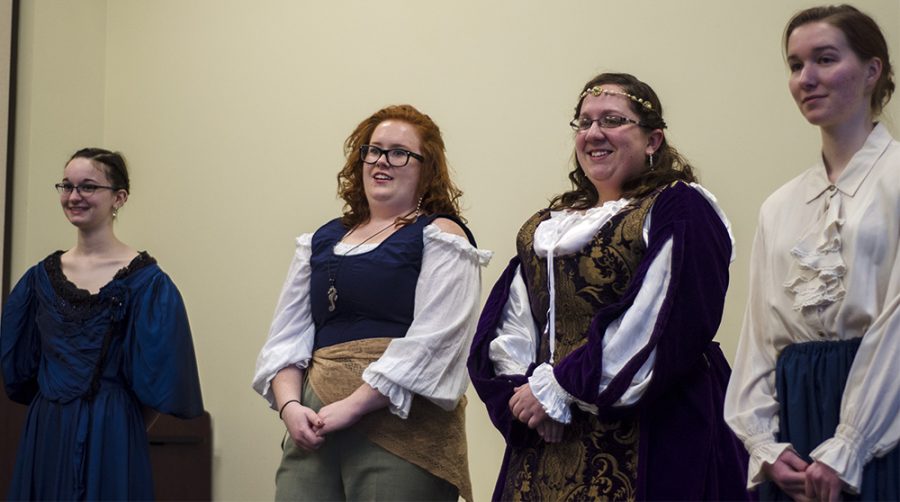 In honor of Women’s History Month, the women’s studies program sponsored a performance in the library where a group of students impersonated a woman of their choosing.

“The intention is to bring awareness of these accomplishments of women and also the struggles of women in history into our public schools, especially elementary schools and middle schools,” Elder said.

Elder said it is sometimes easy to forget, especially for young people, what it was like for women in the past.

“Fifty years seems like eons to a third-grader or even a 19- or 20-year-old, but it’s really, for a historian, really recent,” she said.

One performer is interpreting Katherine Switzer, the first woman to run the Boston Marathon as a registered runner.

“This year is the 50th anniversary of that,” Elder said.

Elder said student Caroline Collet, who is performing as Switzer, runs cross country for Eastern and told her that women are still not included in the 10k races.

“50 years ago, there were a lot of people in the running world who thought that women could not physically run a marathon, and even thought that a woman’s uterus was going to fall out if they even ran that far,” Elder said.

Shelby Hummel, a junior history major, said even though women are generally encouraged to go against social norms these days, it is still against the status quo in society for women to challenge men.

Hummel acted as Eleanor of Aquitaine, Robin Hood’s mother, who challenged her many husbands, such as Louis VII of France and Henry II of England.

Eleanor of Aquitaine did many things that were against the “norm” for queens at the time, such as refusing to give her husband her land.

Bonny is another example of a woman in history who had to challenge a man to make a place in the world.

Coleman said she took a piracy course and was inspired to play Bonny because of the lack of knowledge people have of pirates and their history.

“Anne had a challenge for society, and basically had to become a man to have a better opportunity to live the life that she wanted,” Coleman said. “You can see that today, especially in work places and in the marriage life, where women are expected to do traditional roles instead of being able to do their own thing.”

Coleman said giving up these roles and challenging them in a male-dominated society is exactly what Bonny had to do.

What is amazing about Bonny, Coleman said, is that she was willing to leave her family and go into a world that she knew nothing about and make it work.

“Don’t limit yourself to what people are telling you to be, because everyone was willing to have an opinion of what a woman should be at that time. It took strong people to say no,” Coleman said.