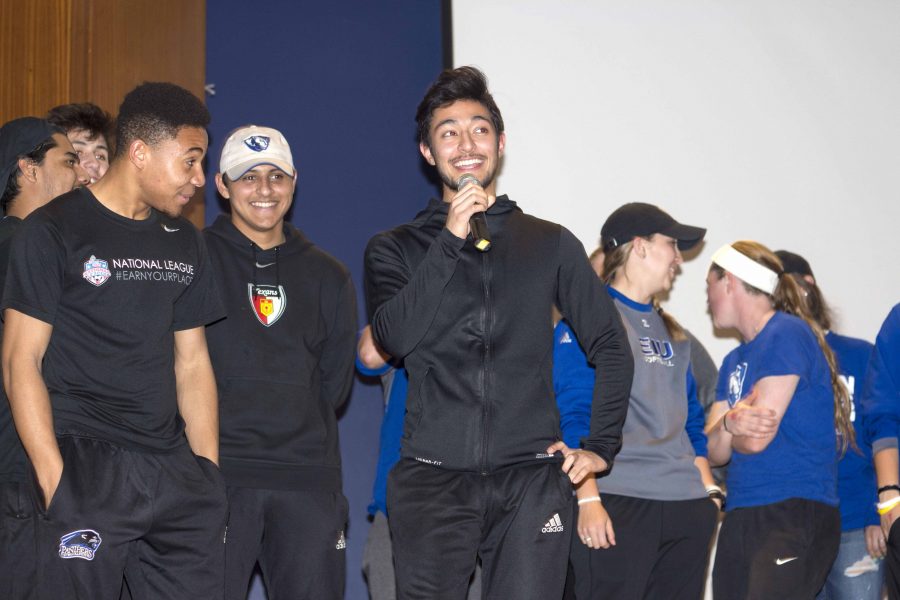 Andre Nappa, a freshman psychology major gives a quick acceptance speech on behalf of the men’s soccer team, who were the winners of Jock 'n' Roll which featured skits from members of sports teams at EIU.

Most of the Eastern athletic teams were in attendance to watch their fellow Panthers compete for the Jock ‘n’ Roll title. The men’s soccer team’s winning act opened the night.

The act consisted of them dancing in black clothing with glow sticks lighting them up in a stick figure. The danced to songs like ‘Don’t Stop Believing,’ ‘Closer,’ and a few other popular songs.

The team’s freshman took care of handling the Jock ‘n’ Roll skit, which was put together a 3 a.m. Monday.

Nappa gave a thanks to his coach Kiki Lara in his acceptance speech.

The women’s soccer team followed that up with their take on the ‘Bachelorette.’ Freshman Malorie Henderlong was the bachelorette looking for love Monday night.

Junior Chloe Gottschalk hosted the show and Henderlong received proposals from the ‘contestants,’ who were pretending to be athletes from the men’s teams. They made up names and gave sexual sports references in their proposals that had the crowd in shock and erupting in laughter.

Unfortunately for the contestants, Henderlong chose her true love: soccer.

Eastern’s men’s freshman swimmer Ethan Wallace was the event’s Emcee and almost had a perfect night, but as we have learned, even the Oscars can have a little blooper.

Wallace was unaware of a video that was going to play and announced it at the wrong time, but caught himself before it happened. Next Oscar host, maybe.

Wallace showed off his talent of being able to do a walking handstand and told his fair share of jokes, keeping the crowd entertained in between acts.

The women acted out a bunch of scenes pretending to be angry, upset, confused girlfriends.

Freshman Alissa Danosky questioned her ‘boyfriend’ as to why he has been liking another girl’s tweets. Redshirt sophomore Gina Furlin was hanging out with her ‘boyfriend,’ and kept bugging him to say hi to his mom, who he was on the phone with.

Before the next act began, Wallace reminded everyone in attendance that it is Athletic Director Tom Michael’s birthday Wednesday, resulting in the crowd singing happy birthday to him.

The softball team also used a pre-recorded video showing ‘A Day in the Life of a Softball Player.’

Senior Ashlynne Paul acted as coach Kim Schuette. The video was far from serious and gave the audience a good laugh.

It showed all of the players dropping all the equipment at the feet of Katie Grunert to bring to the field for practice.

The team also showcased some basketball skills in the batting cage, throwing the softballs into the bucket. Clean up took a little while to get through.

The women’s tennis team’s act ‘Mannequin Takeover’ had the women running around campus with mannequin heads tucked under the hood of their sweatshirts and doing different things across campus.

They interrupted their fellow teammates’ tennis practice, they played some softball, did shot put and javelin. One even had to fight off the cold and jump into Campus Pond.

The women’s basketball team’s ‘Carpool Karaoke’ was clever but could not sway the judges for a repeat championship.

The women were able to dress the part and act like the musicians they impersonated.

The amount of money raised to send Army Veteran Justice Long to the OVC Tournament this weekend was not available after the show.