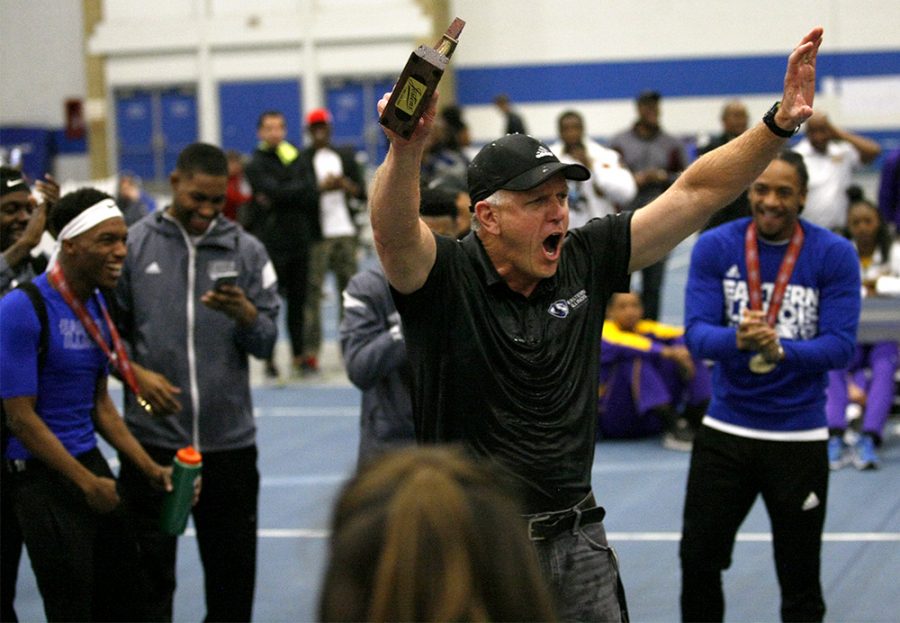 Head coach Tom Akers celebrates after the announcement that both the men’s and women’s track teams both won the OVC championship following Saturday’s final day of the conference meet.

The men and women’s track and field teams both swept the competition at the Ohio Valley Conference Championship and each earned first place honors.

The Panthers hosted the OVC Championships in Lantz Fieldhouse Friday and Saturday. After the first day, the women were in first place, with the men sat in second.

The teams steadily improved throughout the entire season and capitalized off it in the end with earning the OVC titles. It was the 17th time the men have won the title for Eastern and the seventh time for the women.

As the season goes on, winning the conference championship was always the goal.

“Overall the meet went very well, we came out here to compete and win and that is just what we did,” coach Erin Howarth said.

Eastern has been performing well all throughout the season with numerous individual first place finishes and first place team finishes, like at the EIU Friday Night Special and the John Craft Invite. Many athletes that have top conference times in their respective events going into the meet.

Eastern has the top two times for the 60-meter dash, senior Johnathan Boey has the best time of 6.79 seconds, and fellow senior sprinter Jamal Robinson is second in conference with a time of 6.83.

During the first day of the meet, there was a handful of new conference records were set. Junior Haleigh Knapp set the record in the high jump with a height of 5’11.25”, breaking the previous conference record she tied last year of 5’09.75”.

The meet was the first of many OVC conference meets for the freshmen of Eastern track and field, many contributed to the effort, like freshman thrower Nick Phillips.

“It went pretty good overall, it is a lot different and more intense and competitive than I expected,” Phillips said. “The experience just kind of hit me.”

After day one, the women of Eastern had the lead in conference and the men had second. Some of the contributors for Eastern included the women’s distance medley finishing third for Eastern, junior Davion McManis earned third in the long jump, senior Riley Kittridge earned a bronze in the weight throw, and senior Angelica Anyaogu earned a silver medal in the women’s long jump.

The second day saw even more successful performances by Eastern athletes. Some of the highlights were sweeping of the men’s 60-meter dash by Johnathan Boey, Jamal Robinson and Brandan Lane, in first, second and third respectively. In shot put, sophomore Adam Kessler took gold followed by Riley Kittridge earning silver. Then Riley McInerney took silver in the one mile to cap off his senior indoor season.

“We had so many outstanding performances from all over the team, because top to bottom the conference is tight and tough to win, but we did it,” throwers’ coach Jessica Sommerfeld said.

The day ended with a well-deserved, men’s coach of the year award for Eastern track and field director Tom Akers, and then getting doused in water by the team by way of a celebratory water bath.

The team now looks ahead to the outdoor season that opens March 25.

Gallery: Women in first, men in second after day one of OVC meet