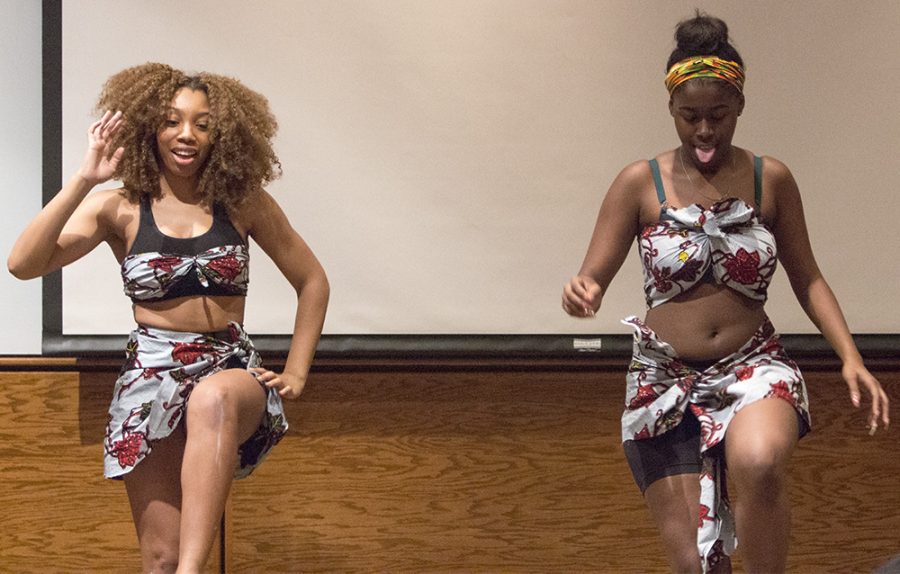 African Student Association dancers perform during The Evolution of a Black Women Wednesday in Lumpkin Auditorium.

Singer Lena Horne and politician Shirley Chisholm were among nine of the successful African-American women presented Wednesday night by Eastern’s chapter of the National Association of Colored Women’s Club in Lumpkin Hall Auditorium.

At “The Evolution of a Black Woman,” the Couture Models of EIU dressed in the clothes of different African-American women who have contributed to American society.

The Living History Project, sponsored by the women’s studies program, is in its 25th year and portrays women from history. The project has participants research women from history and create outfits along with 10-minute speeches about their individuals.

Willa Caldwell, a psychology major, performed a spoken piece called “She,” in which she discussed how African-American women have persevered to overcome oppression.

Arianna Moore, a senior kinesiology and sports studies major, said the nine beautiful, historical African-American women portrayed have made their stamp on the country.

An example from the past included a model dressed as one of the N.A.C.W.C. founders Mary McLeod Bethune. Yakela Hall, the narrator for the night and a junior public relations major, said on behalf of Bethune, she encourages African-American women and men to achieve anything they desire.

The African Student Association had two female performers dance to traditional music in between presentations from the historical women.

Lena Horne was another woman from history represented by the Couture Models. Horne was a civil rights activist, singer and actress.

Hall said in the ‘40s, Horne was the highest paid African-American woman in Harlem as a chorus performer at the Cotton Club.

A model also represented Singer Diana Ross from The Supremes. Ross was praised for achievements such as winning a Golden Globe and a Tony Award.

Hall said Winfrey went to Nashville, Tenn. after she left her mother’s home and escaped sexual abuse from the men in her life.

Winfrey is a talk show host, a producer and a philanthropist who firmly believes education is the way to unlocking the world, Hall said.