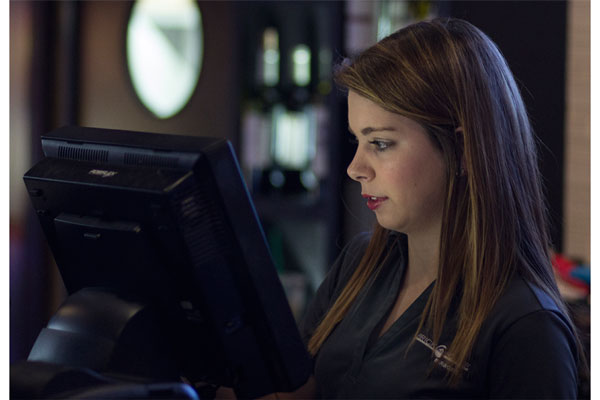 Michelle Chupp, a sophomore physical therapy Lake Land student bartends at Brick house Bar an Grill as a parttime job. She also works at Dirty’s Bar and Grill. She says that she “enjoys talking to customers most of all.”

The color-changing countertop slowly shifts between jade, aqua, sapphire and periwinkle. The cool hues reflect in the faces of the few customers chatting at the bar as Michelle Chupp pours their drinks.

This particular Thursday afternoon, the Brick House Bar & Grill located in the Unique Suites Hotel on Lincoln Avenue borders on empty. With so few patrons, Chupp engages them in conversation and playful banter.

“It’s fun to be able to talk to people,” the physical therapy student from Lake Land College said.

Leaving work at 1 a.m. is just another Tuesday – or Thursday or Saturday – for Chupp. She spends more in a single day working the Brick House bar than managing Dirty’s.

“Mornings are not as long,” said Chupp, who works five hours at Dirty’s and up to nine at the Brick House.

Chupp takes exclusively online classes, freeing up her schedule to allow her the time to work both jobs.

She is not the only one employed at both Dirty’s and the Brick House. When he is not tending the colorful bar of the Brick House, 2014 psychology alumnus Sawyer Howe can be found pouring drinks for up to nine hours at Dirty’s.

Howe enjoys making drinks and experimenting with the beverages. “I think it’s fun,” he said. “(But) sometimes people are specific or picky about how they want their drinks. They want it a very specific way.”

Howe has worked at the Brick House since October and Dirty’s since May.

For some employees, working at the Brick House is more than just a job. Though in the midst of enjoying some time off, bartender Bobbie Jo Staley, a senior psychology major, returned to her workplace for a drink and some banter with Michael Taylor, who manages The Penalty Box Bar and Grill.

“He contributes to the students of EIU’s alcoholic welfare,” Staley teased.

A Brick House bartender for nearly two years, Staley does not work at Dirty’s. Instead, she came from farther down the road in Carbondale.

She said she prefers her job here in Charleston, though.

“The tips were insanely bad,” she reflected on her time mixing drinks downstate.

Staley said the Carbondale crowd was larger than Charleston’s. She said she had to make more drinks more swiftly than she does now, meaning she had to cut back on the care she now puts into each glass.

Closer to campus, Marty’s Bar and Grill runs the gamut from emptier than the Brick House to wild and busy, bartender Shelby Phipps said.

A December communication studies graduate, Phipps said the Fourth Street pub is more popular by nightfall than it is during the day. Despite opening at 11 a.m., Marty’s was completely devoid of customers in the afternoon.

Even for Staley, though, work does mean downsides are inevitable. “I don’t like doing the dishes,” she said.

She also dislikes having to cut customers off, the protocol of refusing to serve customers who are too drunk, even if it is for their own good. “I hate being a Debbie Downer,” she said.

Staley said she treasures both meeting new people and catching up with regulars. “It helps build a network,” she said.

But Staley is proud of more than just her hospitality. She has been practicing several party tricks, including throwing ice cubes and catching them in glasses behind her back.

“I can’t wait to get to work now and try throwing ice,” Taylor said.