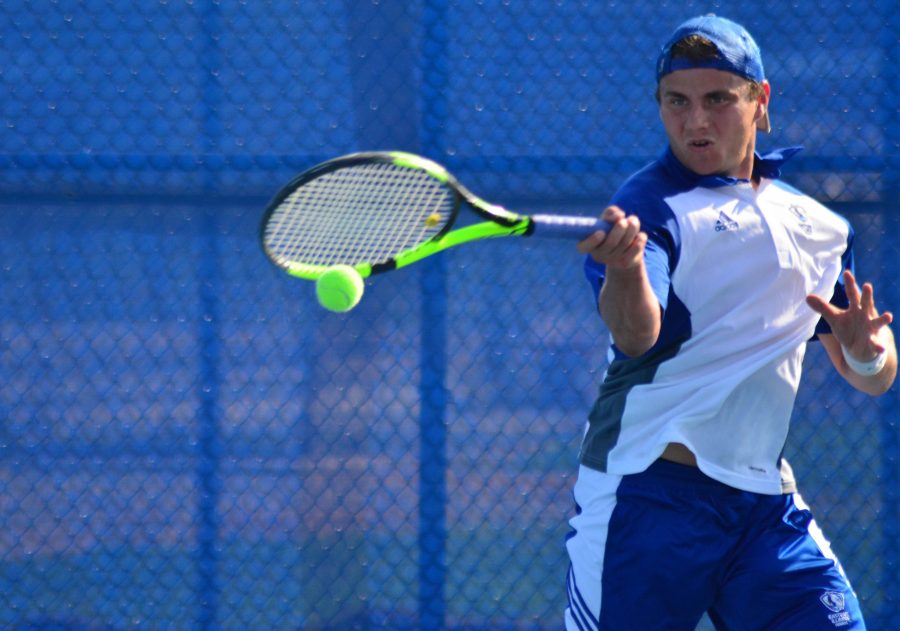 Redshirt senior Jacob Wendell warms up before a practice in the fall season. Wendell plays in doubles matches with teammate Jared Woodson and currently has a 1-7 record for the spring season.

The men’s tennis team has had a rough start to its spring season, something head coach Samuel Kercheval attributes to a tough schedule.

Four of the eight teams Eastern has played have at least an even record: Ball State is 4-4, Indiana is 7-3, the University of Illinois- Chicago is 3-3 and IUPUI is 5-5.

After last week’s loss at Valparaiso, Kercheval said because his team is very young, they are having a tough time putting together some wins.

On the flip side, Kercheval also said the team knows where they need to improve and they know what they need to do to win.

The team has had a progression in their performance throughout the season thus far.

Despite being swept three times this season, the team has gotten better in the aspects of their play.

Early on in the season, a number of problems hindered the way the team performed on the court.

The biggest problem was the team’s energy and emotions on the court.

Kercheval cited this as a problem after the team’s two losses against Saint Louis University and Ball State to open the season.

Since then, the team has had high energy in their matches and they have controlled their emotions better, things Kercheval has been pleased to see.

The other thing that troubled the team early on was handling the pace of the ball.

Specifically, after the loss to Ball State, the team focused on handling the pace better. Since then, the team has been handling pace well.

Despite the rough start to the season, with the problems the team faced, they have worked on the problems and have improved.

Freshman Freddie O’Brien has played tough competition in the No. 1 spot in the lineup, going against the best players from the other teams. He has a 4-4 singles record, adding a 3-4 doubles record with fellow freshman Gage Kingsmith, who has also played well thus far.

Freshman Marko Stefan Janjusic has a 3-5 singles record after playing well, and junior Grant Reiman, despite a 1-7 singles record, has played well and forced third sets against his opponents a couple times.

Eastern will play Southern Illinois University Friday in Carbondale, and then they will travel to Champaign Sunday to play Saint Joseph’s College.