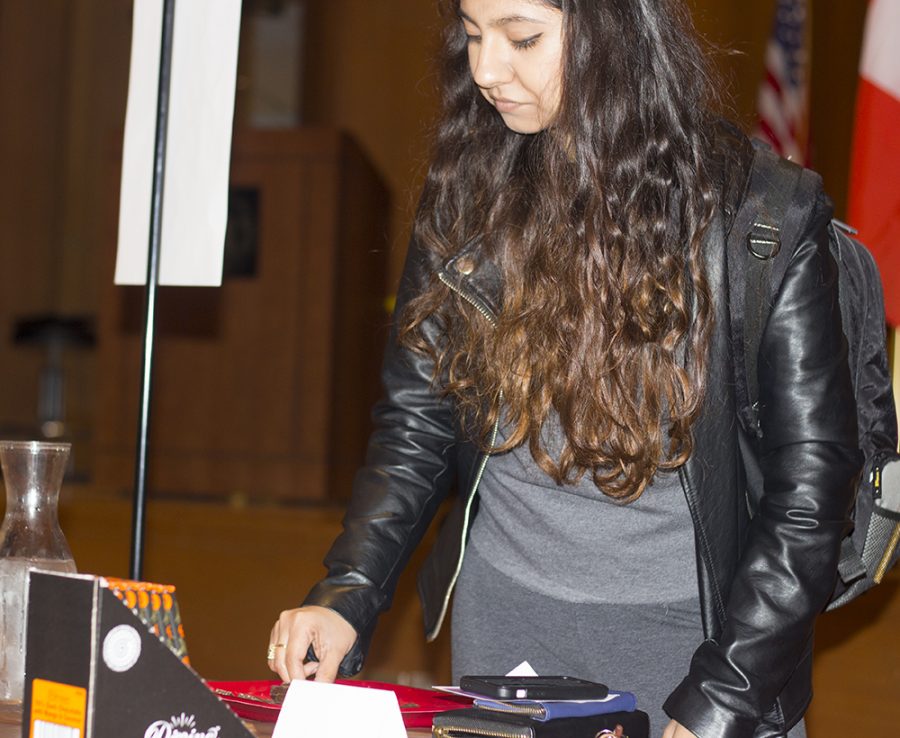 All treats sampled were made without slave labor or child labor, and Katie Caulkins, the committee coordinator, said the tasting brought on conversations about such inhumane practices and raised awareness to their use in the chocolate industry.

“Just bringing that awareness was kind of a hope,” the senior education major said.

“That makes me think twice about eating Hershey’s again,” he said.

Sierra Murray, a junior marketing major who opted to pack up samples to eat later, said the chocolates she stored in cups were likely to taste better than the name brands.

The companies whose chocolates were featured at the tasting include Alter Eco, Divine Chocolate and the Grenada Chocolate Factory.

The tasting was going to feature chocolates from six countries instead of five, but the University Board’s Cultural Arts committee has yet to receive the Costa Rican desserts. They will instead give the missing treats and all leftovers to a raffle winner upon arrival.

The raffle tickets, printed on golden pieces of paper, doubled as surveys about the tasting. The committee called them “Golden Tickets,” a reference to the tasting’s namesake “Charlie and the Chocolate Factory.”

However, not all students found the “sweets” to be sweet.

Other students described the dairy-free chocolates as bitter.

“I don’t know how to describe it,” the freshman chemistry major said. “It’s good, though.”

Regardless of taste buds, most who sampled the goat’s milk chocolates said they were “interesting.”

“It’s cool to have a tropical flavor in chocolate,” O’Brien said.

Alek McMath, a freshman marketing major, said he had sampled every chocolate available except the Grenadian desserts, and the mango and coconut chocolates’ fruity chunks stuck out the most to him.

“It’s very smooth as it goes down,” Sandoval said.