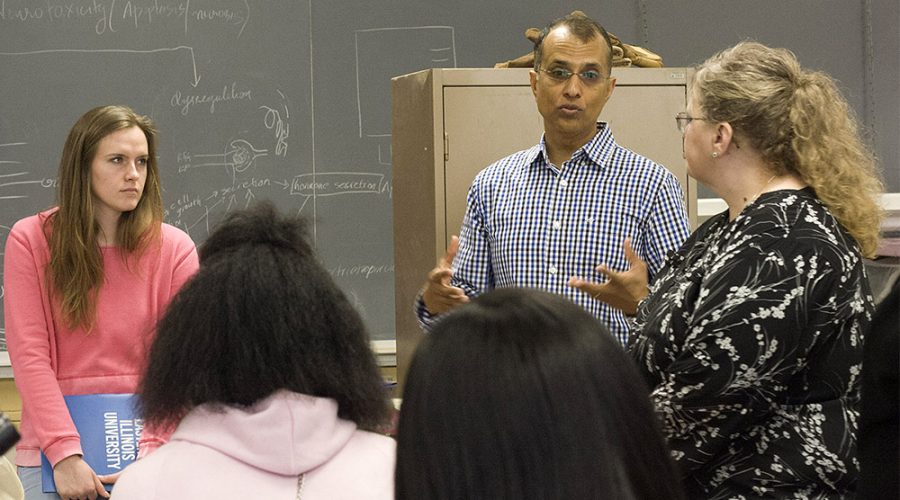 Dr. Britto Nathan, biological science professor, shows admitted students his lab in the Life Sciences building Monday morning. Nathan explains how he does experiments with students and typically examines the brain. Parents and students were given a chance to ask about Nathan’s research experience with Alzheimer's disease.

It is the time of the year again when prospective students are on campus to decide if Eastern is a place they want to call home.

Monday was Admitted Student Day on campus, where potential students and their families got a chance to meet faculty members and discuss their future at Eastern.

They were able to receive information about their intended major, financial aid, student organizations, housing and dining, transitioning to campus and more.

For some people, this was their first time visiting Eastern or Charleston.

Jack Banks, a soon-to-be high-school graduate from Indiana, is currently in the process of selecting a college to attend for his freshman year.

“I’ve applied to other colleges in Indiana, but when I found out Eastern offers in-state tuition, I definitely wanted to explore the option,” he said.

“I sat down and spoke with the special education department here and they by far had the most information to give me than any other school I’ve looked at,” he said.

Although Banks is not fully decided on where he is going to attend college, he said all of the seminars he attended on Admitted Student Day were loaded with information.

“I’m leaving here with no questions at all,” he said.

For some students, attending Eastern might not begin their freshman year.

Alison Blair, an incoming transfer student, said she knows Eastern is the place for her.

“As soon as I came here to visit, I loved it above all other schools, just the entire feel of the campus and everything,” she said.

Unlike incoming freshman, transfer students have the option of living on or off campus when they come to Eastern.

However, Blair said it is important for her to experience living in a dorm.

“I’m nervous and excited,” she said. “I’m excited to have that ‘living on my own’ experience. It’ll be different, that’s for sure.”

Blair also enjoyed the size of the university.

“At some other schools, you disappear and it’s your name on a piece of paper. It doesn’t seem like that at Eastern because of the small campus atmosphere,” Blair added.

Tania Ward, a graduate student studying college student affairs, was wearing the T-shirt because she could relate to prospective students who also have parents who did not attend college.

“I don’t think (my parents) fully understand what I’m doing,” she said. “At times, when it gets tough, they might not be able to have that support to give because they haven’t experienced it.”

Although being a first-generation college student can be rough, Ward said they can help to overcome that by getting involved on campus.

“I got a lot of support on campus from mentors, ACT’s campus ministry and TRiO,” Ward said. “It provides that extra support on just how to navigate through the college experience and how to make the most of the experience.”

She said being immersed in the college atmosphere makes her sometimes forget that she is a first-generation college student.

“Graduating with a bachelor’s and then a master’s degree isn’t necessarily the ‘norm’ to everyone,” she said. “Others in my family say they look up to me for what I’m doing and it gives me the inspiration to let them know that they can do it too.”

Ward added that she would tell other first-generation college students not to be afraid to ask for help or ask questions.

“If you don’t ask questions, it will hinder your growth,” she said. “Take advantage of the resources on campus and get involved in anything you’re interested in.”

The next Admitted Student Day will be March 4.