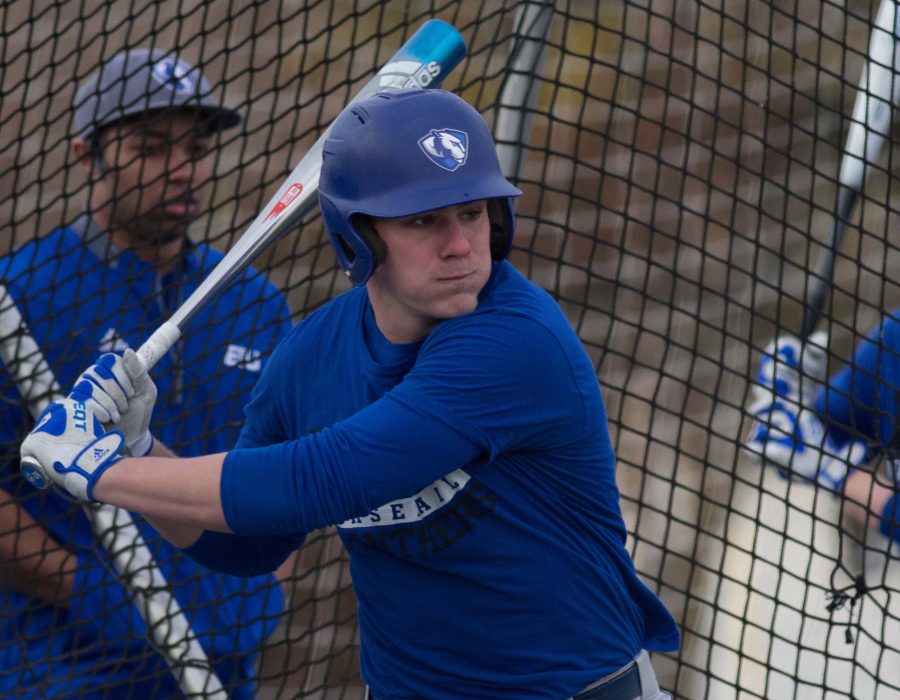 Sophomore outfielder Tyler Tesmond prepares for a pitch in a scrimmage prior to the start of the season. Eastern began the season with a three-game set at the University of Alabama.

In the opening series of the 2017 campaign, the Eastern baseball team was plagued by a problem it was all too familiar with a year ago.

The Panthers traveled south to face South Alabama but their ability to close games and hold leads faltered.

Eastern was swept in three straight games with a 32-0 one-hit route highlighting a struggling opening weekend for the team.

Their first lead of the series came in the very first game as Eastern saw two runs cross the plate off an impressive homerun to left center from Frankie Perrone.

Perrone’s power was all the Panthers could muster the rest of the way though as the other seven hits never found their way in an 8-2 loss.

The loss may sting a little more considering how well Eastern’s pitching was through six innings as no runs were allowed until a back breaking seventh inning.

Stephens allowed four earned runs in less than an inning pitched, and that would be more than enough to put a damper on Eastern’s season opener.

It was more of the same for the Panthers in game three of the series as another early lead was not enough.

Eastern saw the ball well early on and jumped to a 3-1 lead in the fourth after Joseph Duncan singled up the middle to knock in the run.

But the middle innings were once again plagued by a struggling day from the bullpen as South Alabama scored runs in three of the final four innings to run away with an 8-3 win.

The 32-0 route was nearly over before it even started as the veteran Brendon Allen was knocked around in the first leading to an 8-0 deficit early on for the Panthers.

Not much was working for Eastern as Dane Toppel was the only player to earn a hit in the game while South Alabama forced eight Panther pitchers to the mound in the loss.

Despite the sweep to start the season, the Panthers still saw an impressive start by some of their hitters.

Duncan picked up right where he left off last season as he comes out of the opener with a .333 batting average, and Perrone’s two run homer in the first game led him to a .250 average in the series.

McCormick’s spotless ERA is the highlight of what appeared to be a struggling pitching staff that has a team ERA of 17.62.

Their next opportunity will continue on the road with a five-game series at Central Arkansas this weekend before facing Kansas State the following weekend.