Postseason chances come to an end in Panthers’ loss 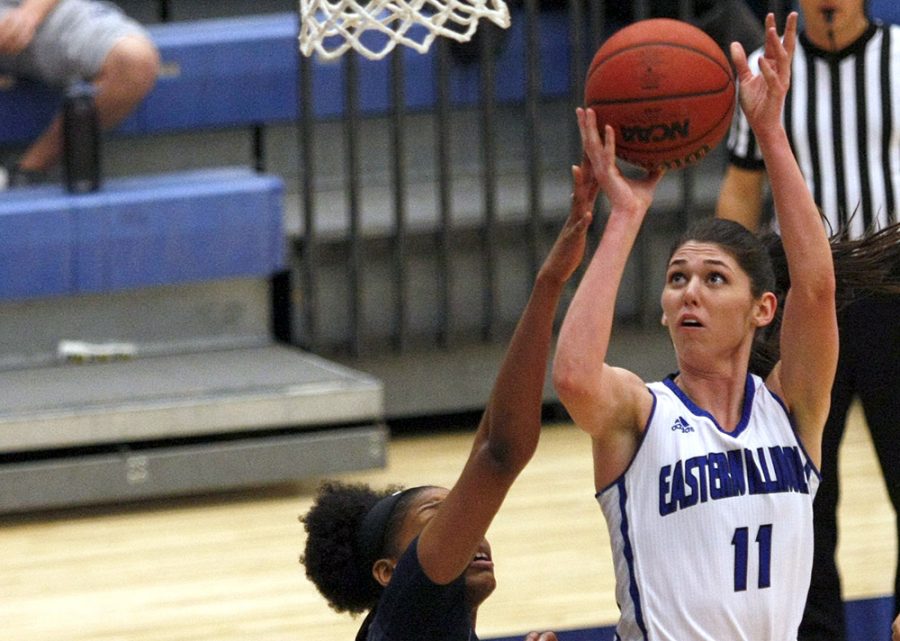 Senior forward Erica Brown takes a shot in the first half of her final home game at Lantz Arena on Wednesday. Brown finished with 23 points and 14 rebounds in the Panthers’ 66-57 loss to Murray State.

The Eastern women’s basketball team was officially eliminated from the Ohio Valley Conference postseason tournament after a 66-57 loss at home to the Murray State Racers.

It was a bittersweet end to a great career for senior Erica Brown who recorded a double-double with 23 points and 14 rebounds in her final game at Lantz Arena. Junior Grace Lennox had a big night for Eastern also with 18 points and eight rebounds. Lennox played all 40 minutes and Brown played 39. Eastern had trouble finding any offense elsewhere with sophomore Carmen Tellez the next highest scorer at six points.

Graduate assistant student manager Ann Duncan and student assistant coach along with Brown were honored before the game on senior night.

Eastern coach Debbie Black liked the effort, but the Panthers could not make the shots needed to win this game.

“The game before this, I was disgusted, we all know that,” Black said. “But this was effort, we gave effort, we had a chance to win this. Honestly, they did everything we asked them to do, but we did not make shots. I don’t think they did anything to stop us.”

The third quarter was even for both teams as they each scored 15 points. Brown and Lennox each had six points in the third and freshman Zharia Lenoir added a 3-pointer. Bethea scored seven points in the quarter for Murray State and Wright had six. A layup at the end of the third quarter by Brown made it a one-point game heading into the final quarter.

Eastern did a good job shutting down one of the conference’s leading scorers in Ke’Shunan James who had five points and 13 rebounds. The Racers were able to find offense from other players however, which hurt the Panther’s. Eastern will be on the road for its final two games starting with Austin Peay on Saturday.