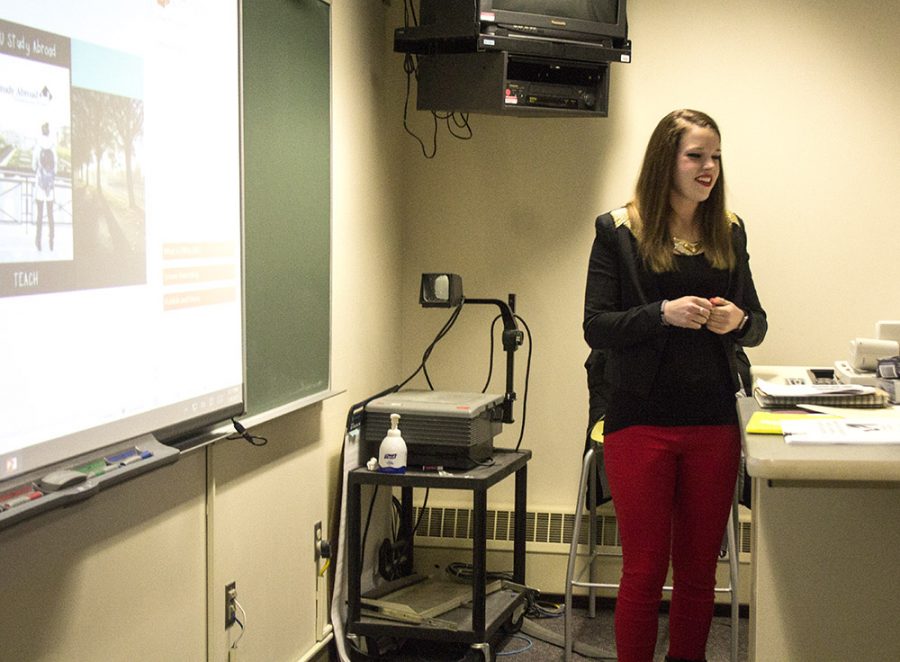 Charity Huwe discusses her travels overseas while student teaching in The Netherlands on thursday night in Buzzard Hall.

Although customs in the Netherlands are different than in America, Charity Huwe, an elementary education graduate student, said Dutch children are not so different from children in Charleston.

Through the Consortium for Overseas Student Teaching program, Huwe was able to spend half of her time student-teaching in Charleston and the other half in Oud-Beijerland, Netherlands.

Huwe had her students at Carl Sandburg Elementary School write letters to the students in the Netherlands, she said.

The American students wrote letters in English to the Dutch students, and Huwe delivered them upon her arrival, she said. The students at Carl Sandburg Elementary School asked questions for the Dutch students like, “Do you have TVs in Europe?” Huwe said.

Huwe student taught from October to December in Oud-Beijerland during the presidential election. During that time, Huwe was often asked about her opinion on the election and was asked who she was voting for, she said.

The majority of the people Huwe encountered had hatred for Trump and even offered her to move into their homes, she said.

A main difference Huwe said she noticed was that everyone biked in the Netherlands. She said the bike lanes were bigger on the roads, and bikes had the right of way.

In Charleston, that is not the case, she said. Another difference was that no lunch was provided for the students in the school in Oud-Beijerland; they all brought their own lunches, she said.

Huwe also said portion sizes in the Netherlands were tiny.

No substitute teachers were hired on days teachers were sick or took the day off, Huwe said. The children in that classroom would be dispersed amongst the other classrooms throughout the school, she said.

Huwe said rather than teaching set subjects like history and science, she taught units on topics like food, religion and sports. From there, the students would learn the history and background of each topic in the unit, she said.

Most of the students’ work in Oud-Beijerland was done independently, and homework was non-existent, Huwe said.

Huwe said she met with teachers to plan the day or week, and sometimes she was told to just do whatever she wanted, so she picked fun, education games to play.

Also while in the Netherlands, Huwe said she was able to travel to Germany, France, Scotland and Spain, among other countries relatively cheaply.

Huwe said she encouraged everyone with the opportunity to student teach in a foreign country, to go out there and do it.

This semester, four students are going abroad, Bower said. One will be in Ireland, one in the Netherlands, one in Australia and one in New Zealand.