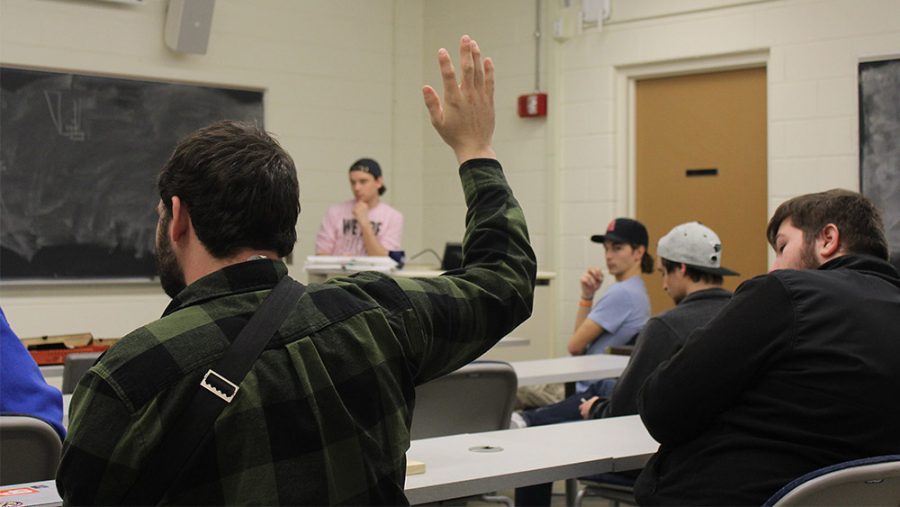 For Tina Bien, a senior applied engineering and technology major, being elected secretary of the construction club changed the way she viewed the world around her.

“I became a demon of perfection,” she said. “I pay way too much attention to detail.”

Bien, who has attended club meetings every Tuesday for 3.5 years, said she considers the club a valuable opportunity for work experience and networking.

For Ryan Naples, also a senior applied engineering and technology major, taking on the role of event and activity coordinator was a first step into leadership and inspired him to become more involved as a fraternity brother of Phi Theta Kappa.

For senior applied and engineering major Read Thomas, however, construction is nothing new.

Naples and Bien’s classmate, Thomas is following in the footsteps of his father and grandfather before him. Growing up in a family of construction workers, he said he sees the construction club as an opportunity to hone his skills and add to the knowledge he has amassed from his kin.

Like Naples, Bien and all but two members of the club, Thomas’ focus on construction. The club is a recommendation for all in the construction focus.

A hands-on adviser for a hands-on environment, assistant construction professor John Cabage, Jr., attends every weekly meeting and works alongside the students.

“I have fun with it,” Cabage said.

Bien, Cabage, Naples and Thomas said the construction club generally completes one project a month, sometimes more, depending on how much time it takes to complete a given project. Some projects, they said, take a single day, while others take upwards of three weeks, possibly longer.

They will build a canoe as their next project, and requests are in from two separate Eastern ecology clubs for a fence and trash pickup, the construction club members said.

With an executive board that maintains positions for a year instead of a semester, the construction club accepts nominations and holds elections every spring. This allows newly-elected board members the chance to integrate into their new roles alongside their predecessors.

They will hold nominations next Tuesday at their set meeting time of 4 p.m. and elections the following Tuesday.

Fees are $10 per semester, which includes T-shirts. Bien said the club has excess T-shirts, owing to a deal with applied engineering and technology instructor Gabriel Grant, who provided extra T-shirts in exchange for a new table.