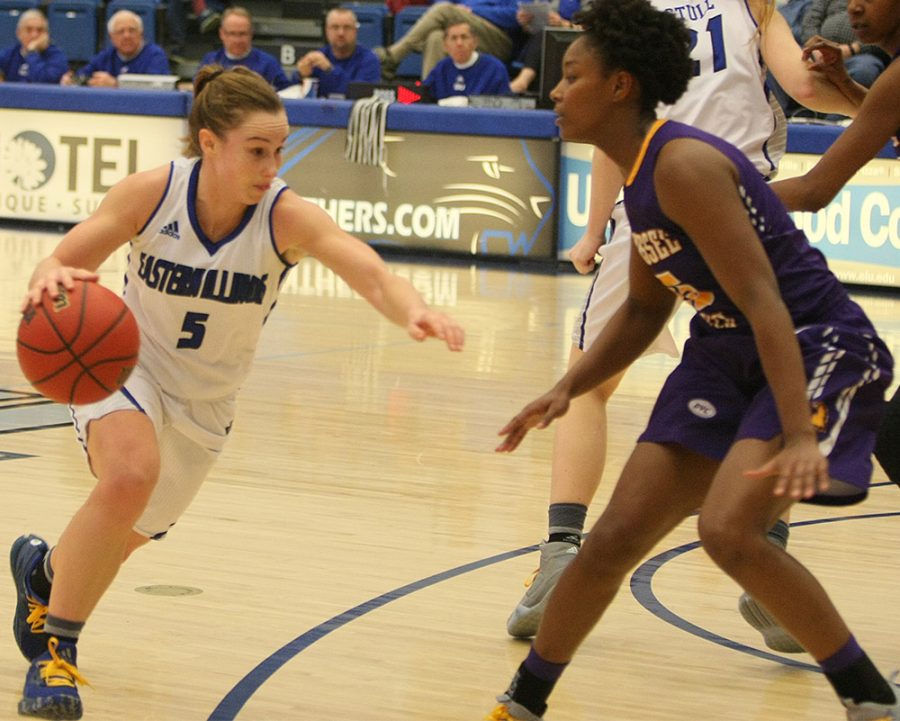 The Eastern women’s basketball team will continue its pursuit of a berth to the Ohio Valley Conference Tournament with rematch on the road against Tennessee-Martin.

The Panthers (8-15, 4-7 OVC) are on the road for just one game before returning back to Lantz Arena for two games. This game serves as a rematch between the two teams, which saw Eastern use a strong overtime performance to defeat the Skyhawks 80-70 on Jan. 18.

The Skyhawks will be a different team than the Panthers saw last meeting as they have won three of their last four since then. Tennessee-Martin and Eastern along with Southeast Missouri and Tennessee State are all tied for the tournament’s final seed with five games left to play.

The Panthers won their last meeting, knocking off Tennessee Tech 54-46 at home on Saturday afternoon.

Junior Grace Lennox and senior Erica Brown led the way for the Panthers each scoring 13 points. Eastern had a season-high 14 steals in the game led by freshman Danielle Berry who had four.

The Panthers played a clean game in the victory with a season low 10 turnovers and held Tennessee Tech to just 46 points which is the lowest Eastern has held and opponent to all year.

Lennox leads Eastern with 15.8 points and 3.5 assists per game. Brown is averaging 11.6 points and 8.1 rebounds per game.

Tennessee-Martin is at the top of the OVC in 3-point field goals made, they average 8.4 per game.

Wednesday will be the 49th meeting between the two teams with Tennessee-Martin holding a 30-18 series lead.

Home court has been valuable for the Skyhawks in this series having won seven straight against the Panthers in the Elam Center. For the Panthers, freshman Allison Van Dyke led them in the last meeting with 23 points in the overtime victory.

Both teams are near the bottom of the league in rebounding, but the Skyhawks are last in the OVC in both offensive and defensive rebounding.

Eastern dominated this category when they met in January, outrebounding Tennessee-Martin 53-37. Brown leads the conference with her 8.1 rebounds per game.

The crucial game for conference standings is set to begin at 6 p.m. in Martin, Tenn.