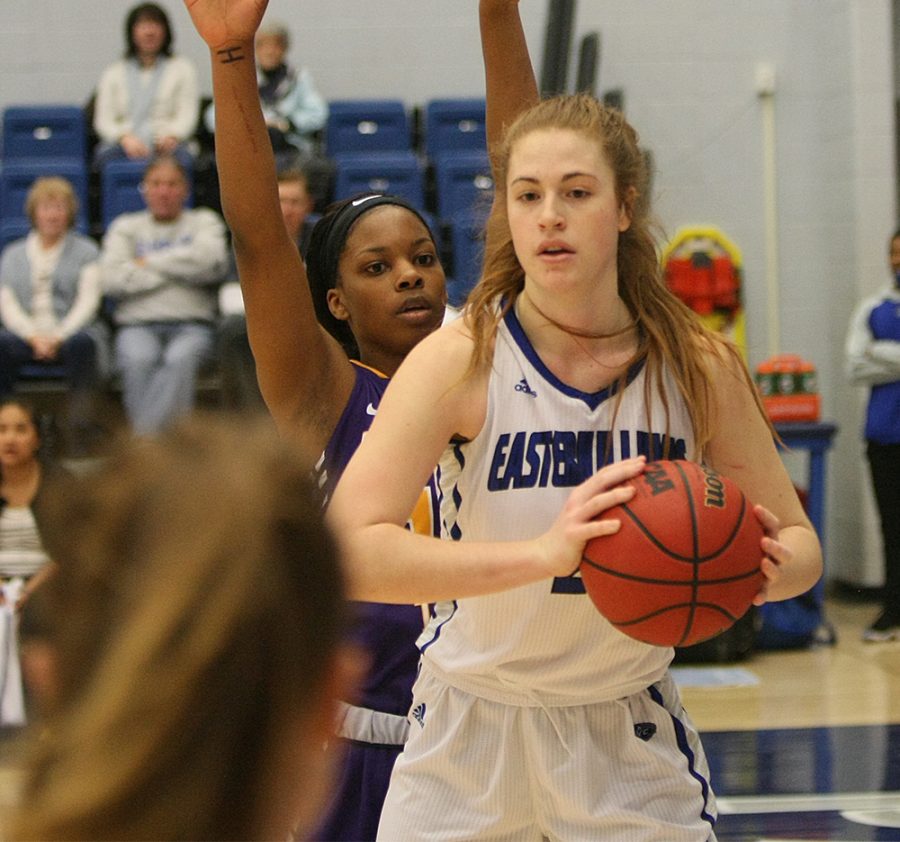 The Eastern women’s basketball team got back into the win column with a solid defensive performance over the Tennessee Tech Golden Eagles on Saturday afternoon.

The Panthers held the Golden Eagles to just 46 points in the 54-46 victory at Lantz Arena. Eastern improves to 8-15 on the season and 4-7 in the Ohio Valley Conference. The Panthers forced 25 turnovers as Tennessee Tech falls to 9-15 on the year and 6-5 in OVC play.

Senior Erica Brown had one block in the game and it gave her 45 blocks on the year, which puts her at seventh all-time in school history for blocks in a single season. Brown also made history with her six rebounds; she is now 10th all-time with 674 career rebounds. Brown scored 13 points in the game.

Brown and the team were looking at this game as a must-win when it comes to making the conference tournament.

“If we want to get a spot in the tournament this was a must win. We have to win this one to get the momentum going for the next upcoming games,” Brown said.

The Panthers jumped out to a 4-0 lead to start the game and held Tennessee Tech to just nine points in the first quarter. Freshman Danielle Berry closed out the first with a jumper to make it 12-9 Eastern going into the second quarter. Berry scored a career-high seven points and had five rebounds and four steals. Eastern had 14 steals in the game.

The second quarter consisted of four ties and four lead changes. Sophomore Halle Stull scored all seven of her points in the second period including a mid-range shot with under a minute left to give Eastern a 28-25 lead. Stull also had six rebounds and five assists in the game.

The third quarter lacked offense as there was a combined five shots made in the 10 minute quarter. Eastern shot just 21 percent in the quarter and the Golden Eagles were not able to take advantage with 10 turnovers in the quarter. Junior Grace Lennox scored seven of her 13 points in the third and earned five of the points at the free-throw line.

Eastern coach Debbie Black had a half court trap defense going on Saturday, which caused the many turnovers for the Golden Eagles.

“You go with what works and nobody saw that yet, you know they’re going to prepare for that,” Black said. “We prepared for them doing it, and they hardly did it to us.”

Eastern led by three heading into the fourth quarter and extended the lead to seven with a fast start to open up the final period. Tennessee Tech fought back and came within two points midway through the quarter. Eastern did not give up the lead however and scored the next six points to give them the largest lead of the game.

The Golden Eagles out rebounded the Panthers 41-28 in the game, but their 25 turnovers led to 24 points. Eastern will go back on the road to play Tennessee-Martin on Wednesday for a midweek matchup.